Virtueonline reported yesterday that Nara Duncan, wife of Robert Duncan, former archbishop of the Anglican Church in North America, is none too happy with Bishop Jack Iker for his recent remarks. In fact, she gave him a piece of her mind:

And why the assumption that Bishop Iker would never make a mistake and hear something that was not actually said, and, of course, Archbishop Duncan---who gave his whole being to assure that all of you childish know-it-all's would have a safe place to worship and not be in fear of deposition, would naturally tell a porky because he ordains women? I would like to wash my hands of all of you and go somewhere else but there is no place to go for a truly catholic believer---oh wait, yes there is---the ACNA! Wow---how could I forget that my husband sacrificed his all---including his retirement---to help start this wonderful denomination---silly me! Shuffle off to Rome and leave my husband alone---you don't deserve him.

Find the full report here . One should recall the background of this. On Nov. 4, 2017, Bishop Iker addressed his diocesan convention and declared that he had broken communion with dioceses, e.g. South Carolina, that ordained women, and would not vote to approve any new bishop in ACNA that ordained women. He also made certain comments about the task force on this issue in ACNA. Find Iker's remarks here . Duncan apparently took Iker's comments personally and fired back. Find his response here . And now, Nara Duncan has contibuted her opinion of the "childish know-it-all's." I say, bravo Nara!

The reason I bring this up today is that it gives further evidence to support two of my recent blog pieces. In one, I described the ACNA as a house of cards that is collapsing. Well, here it is. It is breaking up from its own internal contradictions, how far to go on the reactions against the human rights reforms of the Episcopal Church? Should we oppose women's ordinations as well as rights for non-celibate gays? In another, "Failures and Successes" I opined that it is more accurate to see the schism as a negative than a positive. It was, and is, a backlash against the Episcopal Church. Its only unifying factor was opposition to the Church. There was no internal bond to keep the Anglican Realignment together. So, in SC, opposition to TEC is driving DSC's ongoing litigation.

DSC's membership in ACNA is hugely problematical. It is a disaster waiting to happen. Reportedly, most of the 50 or so bishops of ACNA oppose the ordination of women. Approval of new bishops in ACNA rests entirely with the sitting bishops who must vote yes by 2/3. That means if only 1/3 plus one rejects a bishop elected by a diocese, that person cannot be a bishop in ACNA. Iker has said he will not vote for a candidate who favors women's ordination. I take him at his word. All he has to do is get about 17 other bishops out of the 50 to go along to veto a diocesan choice. With this reality, there is a strong probability that Iker and his allies can force ACNA into becoming an anti-women's ordination denomination. If DSC's next candidate for bishop (Lawrence is 67 years old) fails to get 2/3 approval, DSC will then have to choose whether to elect a new (anti-women's ordination) candidate to the liking of the bishops, or leave ACNA. It is lose, lose, either way.

Meanwhile, my home is a winter wonderland this morning. I live halfway between Atlanta and Birmingham. The average annual snowfall here is about one inch. Today, the weather people are forecasting up to five inches. Dawn this morning revealed one of the great beauties of nature. I took these pictures of my garden at 7:15 a.m. with about one inch of snow. It is supposed to snow all day. I will add pictures as I can. 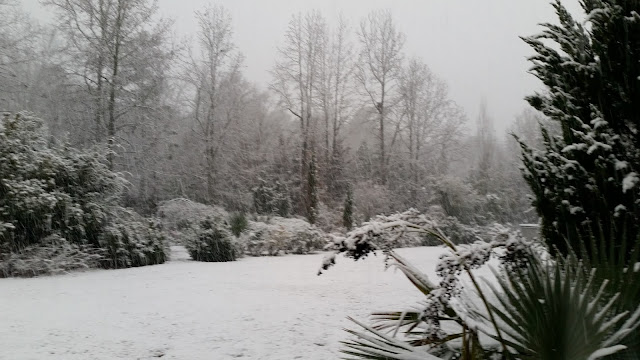 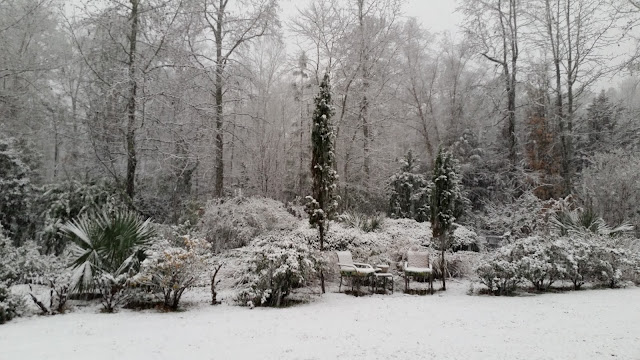 It is now 8:10 a.m. and it is snowing harder. Stand by for my pictures of a beautiful winter landscape. 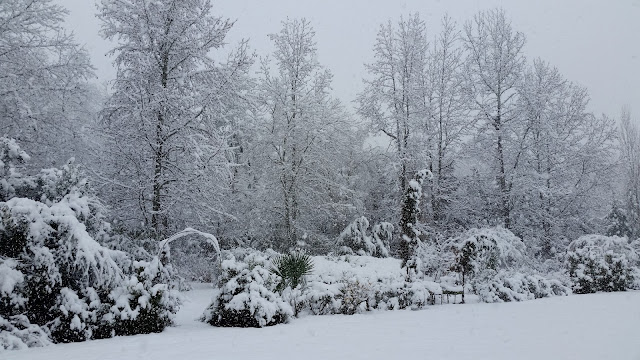 UPDATE. 12:45 p.m. Still snowing hard. Snowing in Birmingham and Atlanta. Six inches of snow on ground here. Practically everything around here closed down. This is the most snow ever in the fourteen years of this garden. Still snowing. Temp at 34F. Garden at 12:45 p.m. 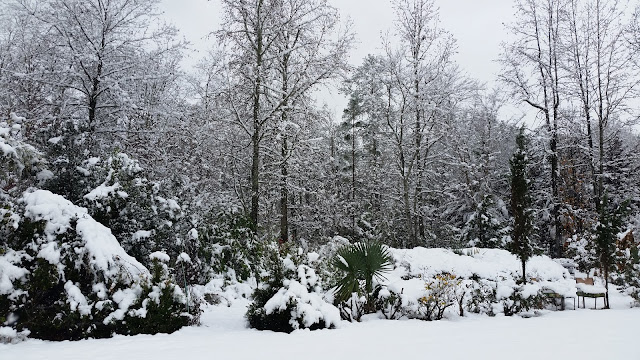 UPDATE. 2 p.m. Rare snow storm unrelenting. Snow still falling. Forecast to continue to midnight with one or more inches. Temp will fall below freezing after nightfall. Electricity out for an hour and a half, now back on.


UPDATE. 4 p.m. Still snowing, 12 hours straight now. To continue for another 9-12. Unheard of here. Even my family in Bay Saint Louis MS reported snow on the ground. It almost never snows in coastal MS. 6 inches on ground here with another 1-3 inches expected. Many shrubs and trees in garden burdened down to ground with wet, heavy snow. Still, a beautiful winter scene. Here is garden at 3 p.m.: 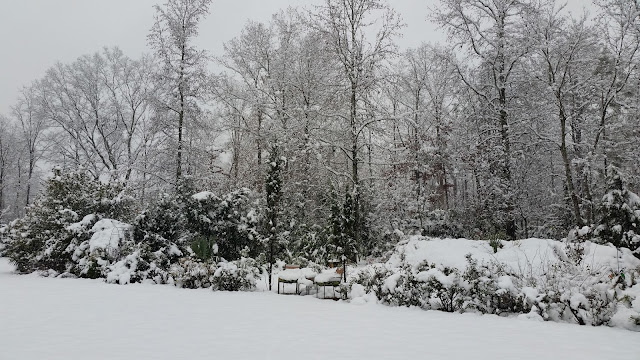 UPDATE. December 9, 2017. 8 a.m.
The snowfall lasted 24 hours. I estimate 8 inches of snow fell on my garden. This is the most snow in this area in 24 years. The dawn has broken with a clear, blue sky. Here is the garden in the dawn's early light. Who could not be moved by the wondrous beauty of God's creation? 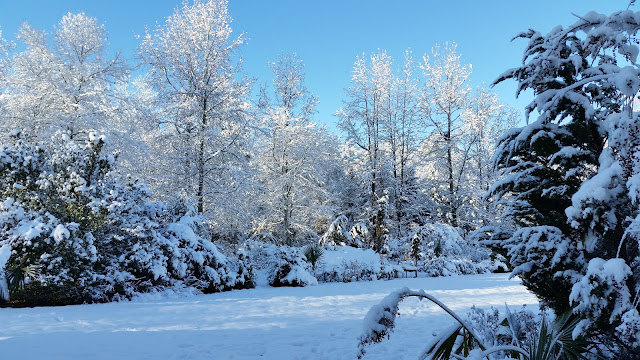 A NOTE TO READERS:
On December 2, 2017, St. Catherine's Episcopal Church, in Florence SC, celebrated their fifth anniversary in a wonderful luncheon. See the pictures of it here . Go to "Photos," Five Year Anniversary. In picture # 2 is my daughter Elizabeth and son-in-law, Rev. Phil Emanuel. In # 3 same plus my wife, Sandy. Scroll down to row four and you will find Steve Skardon and me. It does not take much to imagine what were talking about so intently.
Posted by Ronald Caldwell at 8:11 AM