Alleluia. Christ is Risen! The Lord is Risen Indeed! Alleluia.

It is Easter 2018; it is a glorious day at my house, and I hope at yours. It is the greatest day of the year. It is a time of new birth, of new life; and nowhere in the world is it welcomed this year more than here in Jacksonville, Alabama.

The terribly destructive storms of March 19 brought out the worst in nature but the best in people. Immediately after the tornado, calls went out for volunteers to meet at 7 a.m. the next day. The response was overwhelming. Hundreds of people came from everywhere, chainsaws in hand. All of a sudden, and unannounced, trucks loaded with precious cargoes appeared from as far away as Michigan. They had to look up Jacksonville, Alabama on the map. In all, 5,000 men and women showed up as volunteers. I know first hand that many came as church groups. They went from house to house cleaning up without asking a question. They just pitched in and did what needed to be done regardless of denominations. The big churches have done a tremendous amount of work. Thousands of donated items suddenly appeared out of the blue as if by magic. The disaster coordinators have handed out 12,000 items. Even the insurance companies, so often the bane of our existences, showed up immediately. Allstate parked an enormous van at the Winn-Dixie parking lot to settle claims on the spot. Other companies did too.

Love, care, compassion, and selfless giving is what Christianity is all about. There are really only two commandments, love God and love one's neighbor. The last two weeks here have shown that many, many people have taken to heart those two commandments. They showed up to do hard work for no pay, just to help people in need, people they did not even know. This is loving both God and neighbor instinctively, unconditionally. This is faith at its best. Christianity is not really about doctrines and dogma. It is not about who is right and who is wrong. It is about living the gospel, doing God's work in the world. That is why human beings were created. That is our mission in the world. I saw the best of this in the past couple of weeks right here. This is the best Easter Jacksonville, Alabama, has seen in a very long time, probably since the Civil War. 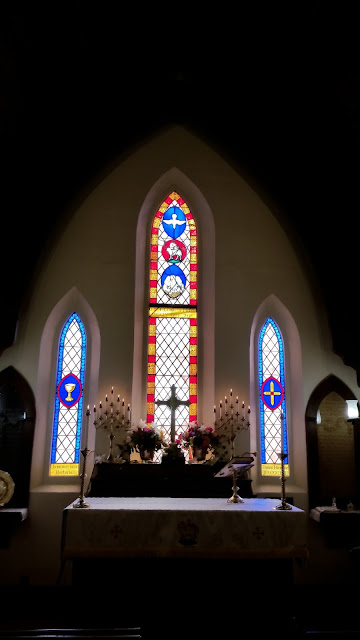 St. Luke's Episcopal Church, Jacksonville, AL (1856) after first Eucharist this morning. The stained glass windows are original and were specially made by the Sharp and Steele Co. of NYC in 1856. The company was in business from 1850 to 1896 and was known for the fine quality and vivid colors of its of its stained glass. These windows are now priceless treasures of antebellum Alabama. The violent winds of Mar. 19 came within four blocks of the church.


Now the queen of seasons, bright

And so, I go back to the beauty of nature in my garden for consolation and hope at this glorious Easter time. I cannot give you real candy, but I can give a little eye candy to enjoy the grandeur of the season. 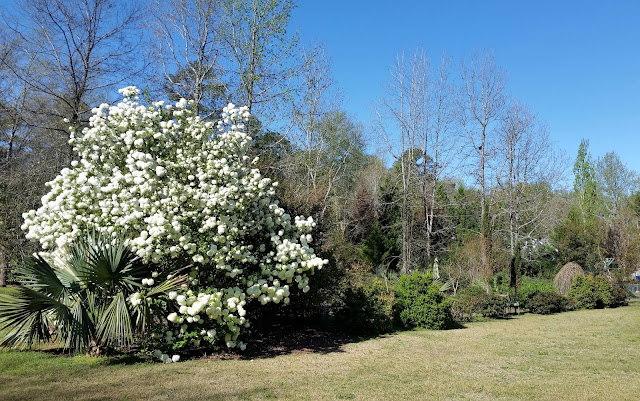 The Snowball Bush gets full sun. It is spectacular. 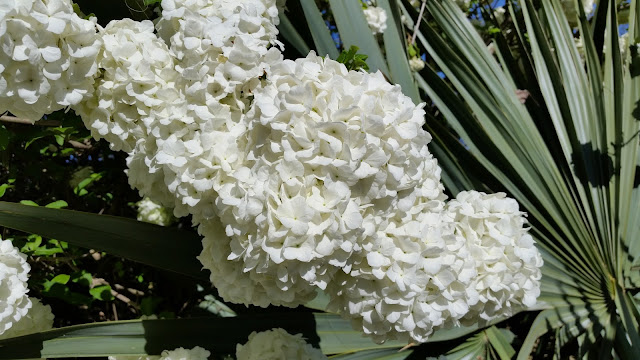 The "snowballs" up close. Each ball is made up of dozens of tiny flowers. 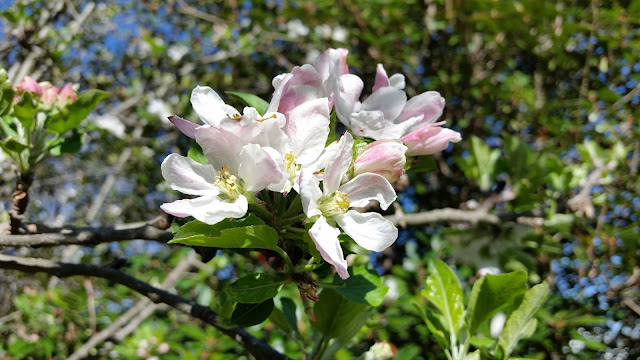 Dwarf Red Delicious apple tree in full bloom. I have two dwarf apple trees. Every year they produce lots of apples but I never get any of them. I have learned that deer are crazy for apples. They will get up on their hind legs and stretch to reach them all; and they do. I also have four large blueberry bushes. Deer love blueberries too as do all the birds, squirrels and who knows what else. 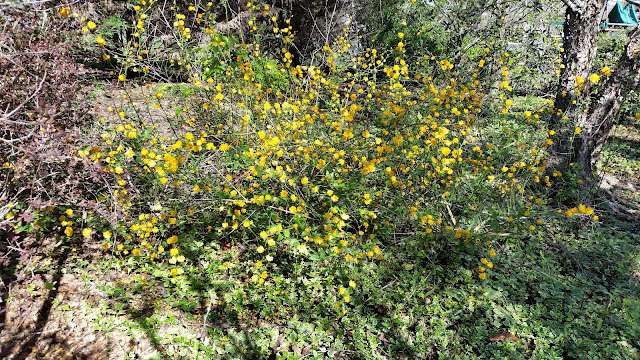 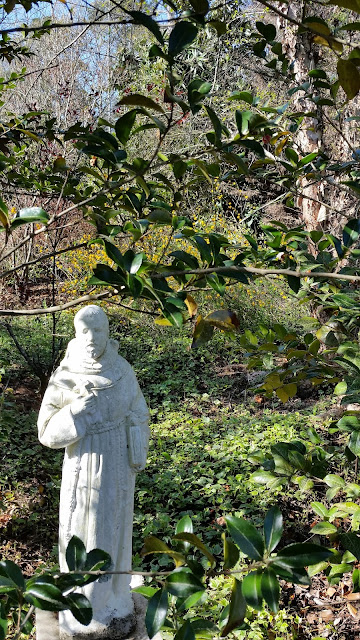 St. Francis has been a resident from the start. A camellia bush is about to overtake him. The ground cover is Algerian ivy "Glacier." The large tree on the right is River Birch. Yellow Rose of Texas is in the background. 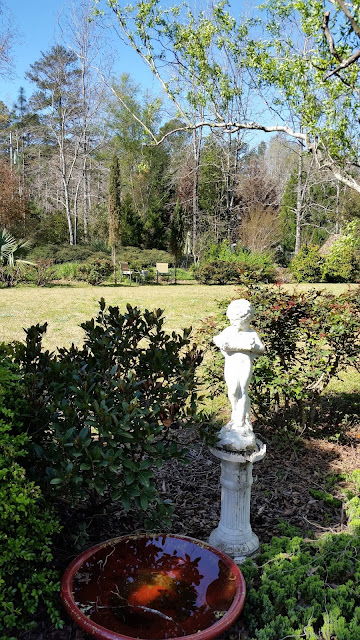 There is no piped water in my garden, so as my water feature, I have pots out here and there for birds and butterflies (with mosquito pellets applied). The shrub to the left of the figure is "Strawberry Bush" (Arbutus unedo 'Compacta') One summer I nursed it all the way back from California in the car. It grows naturally along the central coast of California. This one is perfectly happy in Alabama and rewards me with blooms that resemble strawberries. Most of my plants are ordinary ones common in the southeast, but I do have an eclectic collection I have amassed from Florida, my home state, to California, where my granddaughter lives.


One of these days, the tragic schism in South Carolina will be over. The unpleasantness will come to an end, I suspect sooner rather than later if the U.S. Supreme Court does as I think it will do. The 29 parishes will return to the Episcopal Church and the two dioceses will have closure in the federal court. When all is said and done, all people should be able to say they behaved in ways to honor the name their bear. That is my thought and wish on this glorious Easter day.

May you and yours know the full joy of this day and season.

Posted by Ronald Caldwell at 5:25 AM