Five years ago today, I started this blog. I had not kept a web log before and I had no idea what might be in store. I am glad now I started it and did not know what was going to happen in the five years. I have always believed it is best we do not know the future. If we did, no one would want to get out of bed.

I began this blog for two reasons, to provide a modest, little commentary on the progress of my writing a history of the schism and to give information and informed opinion on the ongoing events of the schism. I am satisfied that the blog has succeeded reasonably well on both counts.

First of all, the blog has proven to be far more popular than I had imagined. At last check, it has had 473,400 "hits." In the last few months, for whatever reason, the blog has seen an explosion of interest with 120,000 hits in the past three months alone. I continue to be amazed at how many people read this modest space. Although many people consult this blog regularly, I am the one who has benefited the most. It is a good way to vent and to organize thoughts.

I have posted around 425 items in the five years, with 415 still up. A few I removed for one reason or another. The number one, most accessed posting in the whole five years was "Cert Denied," of June 11, 2018, with 12,555 hits. This, of course, was the information on the U.S. Supreme Court's refusal to take an appeal of the case from the South Carolina Supreme Court. The court's refusal was essentially the end of the road for the question of the disposition of the parish properties. The next most popular item was "Chronology," with over 11,000 hits. In this, I provided a detailed timeline of the background, events, and aftermath of the schism. I suspect people have found this most helpful in following the complicated litigation. The next most often read piece was "A Remarkable Bishop, A Remarkable Three and a Half Years," of Sept. 1, 2016, with 5,469 hits. This was a reflection on the episcopate of provisional bishop Charles vonRosenberg. The next most popular item was the Rev. Rob Donehue's great letter of July 2, 2018. At last glance, it had received 2,774 hits. The "Sources" posting has also been popular. It provided an annotated bibliography of the history of the schism. It is the listing I made for my own research and writing of my history of the schism.

All of the numerous "Letters to This Editor" have been remarkably popular with readers. Wayne Helmly's moving letter of yesterday is still going viral on Facebook (1,300 hits in one day). It is good to have on the blog the views and words of other people. I expect readers get a bit tired of what Steve Skardon and I have to say. It is too bad there has not been a similar blogger on the breakaway side. I wish there had been. As a reminder, I encourage everyone to send me your thoughts on any aspect of the schism. If possible, I will post it and will omit name if you wish. Occasionally I get email that is not printable. I am sure you understand. I still welcome all emails.

When I started this blog, I was underway collecting all the documents and other sources I could on the history of the schism with a goal of the publication of a thorough narrative history of the schism. I wanted people to know how the break had come about, how it had occurred, and what it might mean for the future. I figured I could finish the book in a couple of years, about my imagined length of the schism. Wrong on both counts. I worked on the book for over four years absorbing over 2,500 papers and writing and rewriting text. I had to cull out over 100 pages of text to avoid a two-volume work. The hardest part was in the last few months when I was undergoing daily radiation for prostate cancer, recovering from surgery, and trying to meet the publisher's deadline. With a lot of help of most generous people, as Joan Gundersen, I managed to finish on time, even as the state supreme court issued its long-awaited decision. The treatment was a success and so was the book which has been met with positive professional reviews.

So, here we are nearly six years into the schism. To summarize everyone's feeling now, I would use one word, exhaustion. Everybody on both sides is just worn out and ready for it to be over and done. Enough already. Unfortunately, the legal system moves at its own glacial pace and there is nothing anyone can do about it. Judges proceed as they can. Every move seems to require a lot of time.

Nevertheless, the general outlines of the end are in sight. There are two avenues of the litigation now and both are slowly moving to conclusion. In the state court, Judge Dickson is to hold a hearing on all the papers before him late next month. It is reasonable to assume he will deal with it all as one package and proceed with the enactment of the state supreme court decision. Meanwhile, the federal court is preparing for a trial, in March of next year. That case will settle which side is entitled to the pre-schism diocese. Odds are strongly in favor of the Episcopal Church diocese. Thus, the judges Dickson and Gergel should essentially wrap up the litigation. As I see it, Dickson's work is not subject to appeal; however, the federal court decision is subject to appeal in the U.S. Court of Appeals, in Richmond. I doubt that DSC could delay the return of the 29 parishes, but it can postpone the turn over of the entity of the old diocese.

I know all this business must seem interminable to you readers out there. I get a lot of emails. However, we must not be disheartened. The end is in sight, if still far off on the horizon. The end will come, and the Church diocese will get on with its reconciliation and rebuilding and the Lawrence diocese will get on with its reconstruction from the ruins. It can still be a viable diocese but will face enormous challenges in rebuilding. Both sides need to get this schism behind them and move forward in doing what they are supposed to be doing, God's work in the world. The schism is a fact of history now, but the sooner it all becomes history the better.

And so, I will close with the new book review in Church History, the leading professional journal of the subject, with permission of the journal. I thank Frank Kirkpatrick for his words. I could not imagine a better way to mark five years online. Click on the image to get an enlargement. 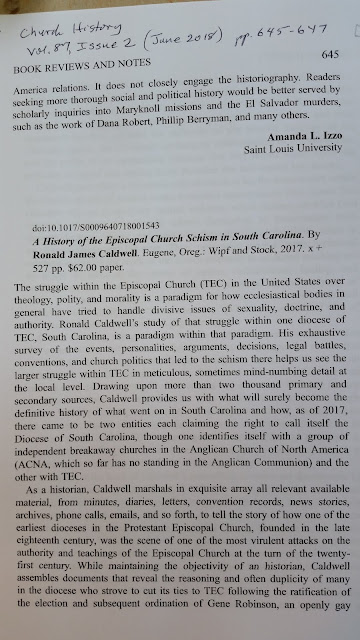 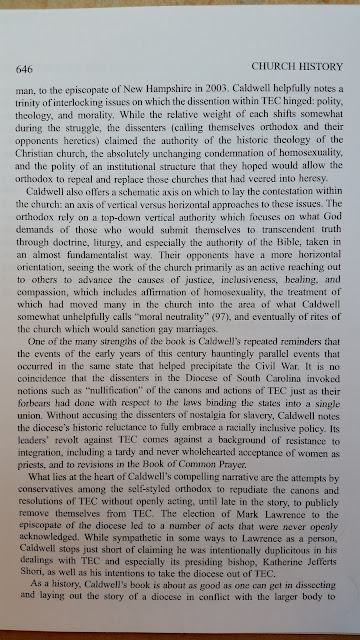 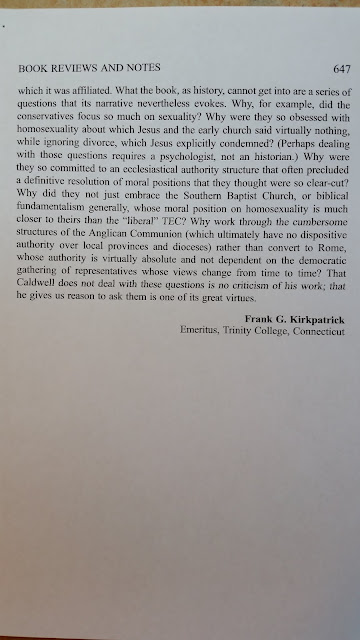 These five years have been hard in many ways. I know it is difficult, maybe impossible, to see today, but I believe down the road good will rise from the ruins of the schism. The Diocese of South Carolina has survived a great deal of adversity and bounced back every time. The American Revolution all but ruined the old established church. The Civil War seemed the end of the world in the Low Country, at least to the white gentry. The despicable Schism of 1887 institutionalized the shameful racial discrimination that lasted for more than half a century. A bishop was shot and killed by a man probably motivated by racism. In the 1960s and 1970s, Bishop Temple led the diocese to weather the storms of racial integration, new prayer book, and equality for and inclusion of women in the life of the church. At the time, every one of these crises seemed terribly devastating.

There was a common thread in all of the great crises in the history of the diocese, social policy. The present day division is part of this big picture. It too, came about because of social disagreement, that is, how we treat homosexual and transgendered persons in the life of the church. If the diocese survived the earlier social conflicts, it will this one too. Years from now, people will look back and shake their heads in dismay at the foolishness of 2012.
Posted by Ronald Caldwell at 5:53 AM