A FRIDAY BREAK
IN AN EARLY SUMMER GARDEN

My garden has transitioned into its early summer phase and is flourishing thanks to lots of rain and a little care. Given the mild winter and a great deal of water since, the plants are going gangbusters and so are the weeds and pests. However, I say a garden that won't grow good weeds is not much of a garden. Strolling around my modest Eden these days we find: 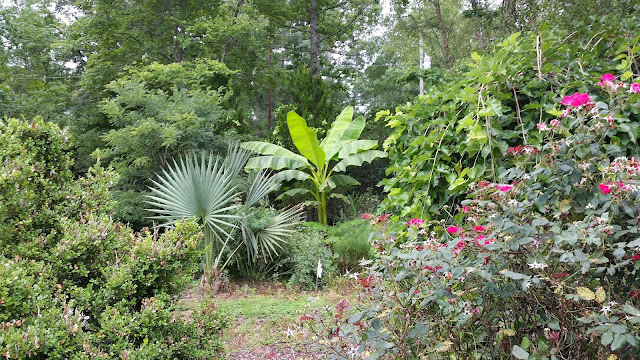 From this angle, the garden appears to be an overgrown jungle. Actually, it is not as crowded as it looks in this picture. However, in planning the garden I followed the Olmsted rule, over plant at first and thin out later. As you can see, in a sense, I have never left the Florida of my youth. 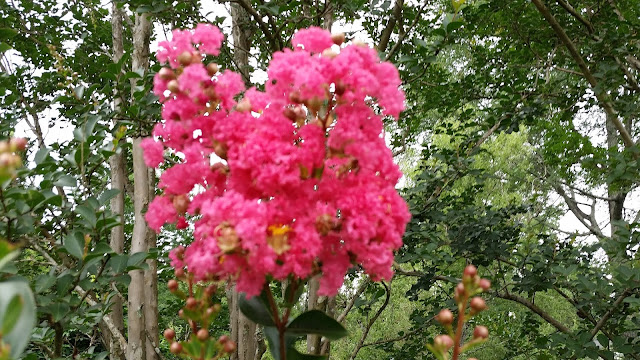 Crepe Myrtle is the glory of a southern summer. This one is "Tuscarora" (Lagerstroemia indica, 'tuscarora'), a large shrub with deep pink flower clusters. I would say crepe myrtle is the most common summer flowering shrub in the south for obvious reason. 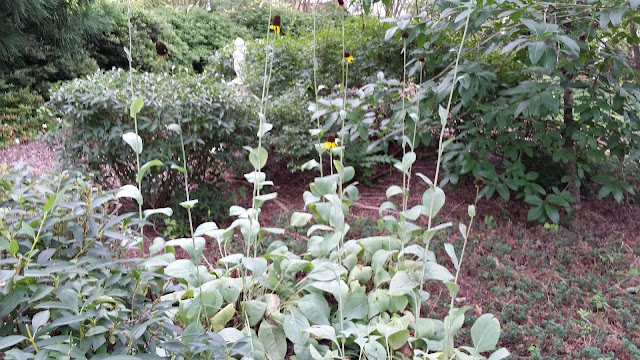 Great Coneflower, aka Giant Black-Eyed Susan (Rudbeckia maxima) puts up 6' flower stems topped with large seed pods, a favorite of birds. I am sure I have the happiest birds in the county because I give them plenty of natural food and nesting space. They reward me with the sweetest music in the world. It's a happy trade-off on both sides. 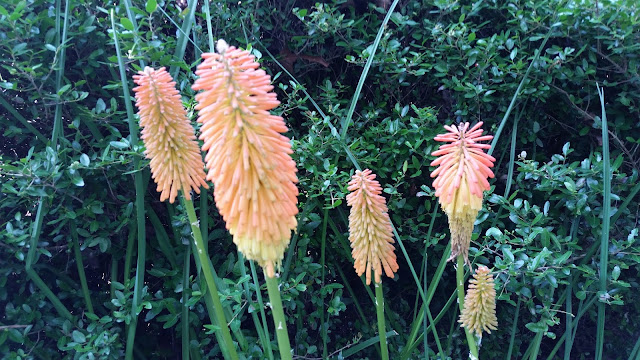 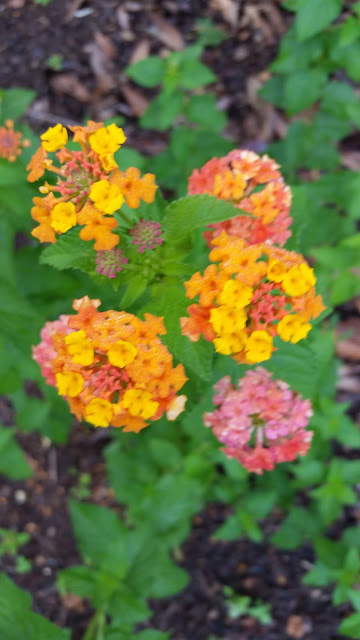 Lantana is another southern favorite. It comes in bush form and trailing ground cover form. This is a perennial bush form called "Miss Huff." Given full sun, it will bloom prolifically all summer and attract butterflies and hummingbirds. Abelia grandiflora 'Sherwood.' The abelia family of shrubs is one of the best for southern gardens. They are foolproof, low-maintenance and often used as trimmed hedges. I prefer that plants grow naturally as long as they do not overwhelm their neighbors. 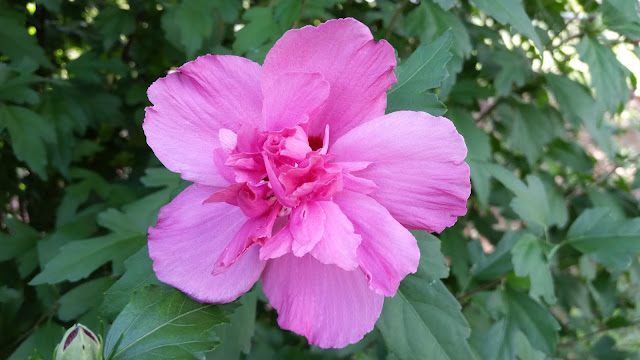 Althea, aka Rose of Sharon. Red Double Rose of Sharon (Hibiscus syriacus amplissimus). Not a rose at all, but a deciduous hibiscus shrub. A common summer flowering shrub in the south and for good reason. 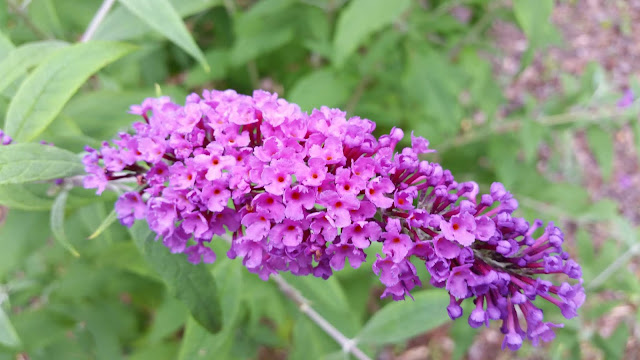 Butterfly Bush (Buddleia davidii "Harlequin'). Well-named, but for whatever reason, there has been a serious decline in the butterfly population in my garden in the last few years (the monarch has disappeared). I miss the butterflies. 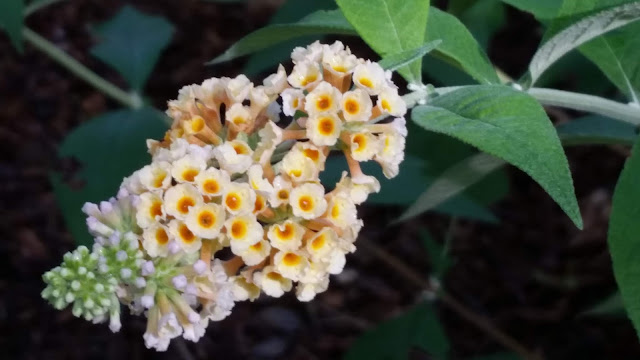 Butterfly bush comes in several colors. This one is yellow. 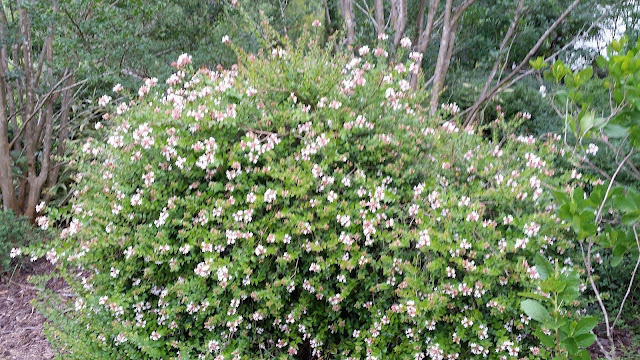 Another abelia. This one is "Kaleidoscope." Again, one of the best shrubs for the garden. 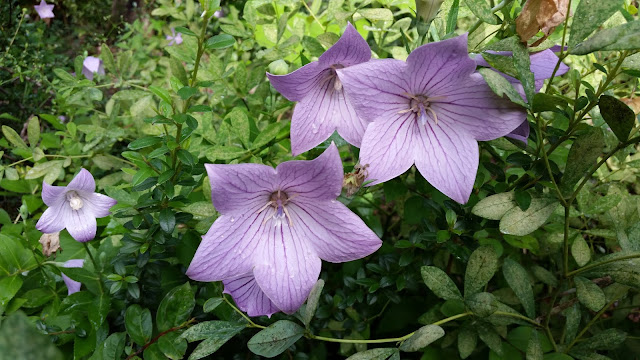 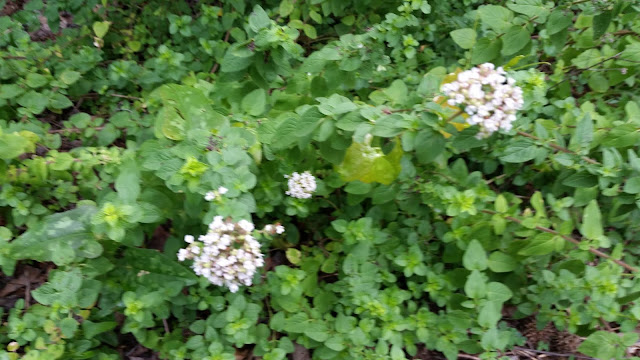 Oregano. Where would Mediterranean cooking be without oregano? Dull. If you have room for one herb, try this. It makes an elegant plant that flowers in summer and is very easy to grow. This garden-grown plant has a stronger and more "minty" flavor than the stale store-bought kind. Another good garden herb for the south is rosemary. 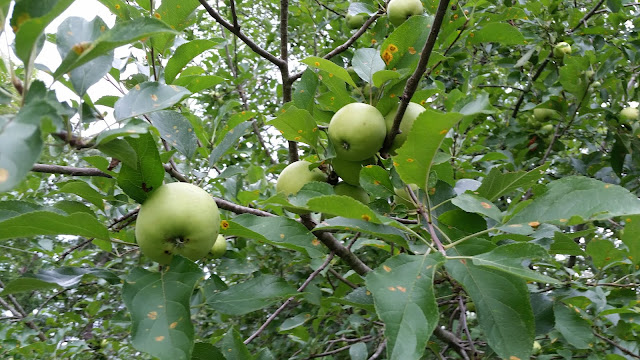 Golden Delicious Apple. I have two semi-dwarf apple trees and three large blueberry bushes yet I do not get to have any apples or blueberries. My garden is popular with the wildlife. I have learned by experience that apple is a favorite snack of deer. These apples are only half-grown but already the deer are eating the low-hanging fruit. Soon they will start stretching up on hind legs to reach higher.


I hope you enjoyed our little stroll around my garden and are having a pleasant summer. Given the state of the schism, everyone needs some diversion and therapy to stave off the  madness that may come from battle fatigue. My best therapy is gardening, for both the physical work and the aesthetic enjoyment of God's beautiful creation. Not everyone has the room for or the interest in growing things. Other people prefer other forms of therapy. Some people lose themselves in their jobs, or in their studies. My father's escape was fishing. He would have fished 24/7 if it had been possible. His therapy must have paid off because, in spite of a highly stressful job of police chief in Pensacola, he died peacefully in his sleep at the age of 96. Some people clean house to a fault, some shop til they drop, some work out in the gym until there is no sweat left, some lose themselves in music, or in any of a thousand other satisfying hobbies. All of these are useful for our emotional well-being.

My point is, the schism is dragging out longer than anyone thought it would and the breakaway side has shown every sign that they are resolved to throw up every roadblock possible to keep from turning over the keys of the properties the state supreme court has already awarded to the Episcopal Church. No one has any way of knowing how much longer this tragedy is going to last but we do know the wheels of justice turn very slowly. Glaciers melt faster.

If you feel frustrated, disappointed, even angry by what has happened in the schism, you have every right and reason to feel that way, and you are not alone. Claim those feelings. However, it would be wrong to let those feelings, legitimate though they may be, get the best of us. That is why I suggest everyone sinking in the pluff mud of the schism should find a diversion, a therapy, and keep occupied for the duration. The litigation will end one day. It is just a matter of time. We just cannot know when that will be. Meanwhile, garden, or go fishing, or ( fill in the blank ).

Posted by Ronald Caldwell at 5:27 AM