The French Revolution was the overriding world event of its day, and arguably for the next century and a half in western civilization. It impacted civilization profoundly and still does.

The revolution itself was an enormous event, going on for a decade (1789-1799). It brought dramatic and drastic changes to life in France and beyond. Space here does not permit a long listing of reforms enacted in the revolution. One to point out is that, in 1794, France was the first nation to abolish slavery and all of its ugly aspects in all of its territories. The effect of this was incalculable on every other western nation all of which eventually followed suit. This alone is enough to make us remember the French Revolution but there was more, much, much more in that transformative decade.

The revolution was basically the uprising of the common man and woman under the belief they could govern themselves guided by the principles of liberty and equality. To be sure, the French were inspired by the American Revolution, but that revolution was essentially a declaration of independence from the mother country. It did not significantly alter the social, cultural, or economic structures of the colonies/states. The French undertook to transform society radically, even if they had to do it with a great deal of violence and bloodshed. As an example of the differences, the American Revolution bolstered slavery, the French Revolution abolished slavery.

Looking back over the sweep of history, the French Revolution was perhaps most important for its symbolic meaning to people then and afterwards. During the revolution and ever since, how one saw the revolution depended on where one stood. To conservatives, as the established, privileged, and propertied classes everywhere, the French Revolution was hell. They saw it as unmitigated violence and destruction. On the other hand, common men and women, particularly of the middle and working classes, saw it, and still see it, as heaven. They viewed it as constructive reform for the masses. There was no middle ground on something as sweeping as the French Revolution.

The French Revolution was the predominate force hanging over the western world in the Nineteenth and early Twentieth Centuries. As such it remained as controversial as ever. The middle and lower classes tended to glorify the revolution as the rise of the common man and woman. This was expressed in popular music and image. The first national anthem, La Marseillaise, became the rallying song of the uprising of the common people against oppression. Perhaps the most memorable rendition we have now on record is that of the great opera diva Jessye Norman at the bicentennial celebration in Paris in 1989. Draped in giant flag, she floated about as a goddess of liberty giving the song dramatic life and power.


My personal favorite rendition of the anthem is from the movie Casablanca. Rick motions the band to play it to overwhelm the obnoxious drinking song of the Nazis. This symbolized the victory of love over hate, the theme of the movie.


Perhaps the most important visible symbol of the revolution was Marianne who, with shades of Joan of Arc, represented the common person (Marianne was a very common name in 18th Century France). She was often shown wearing a red Phrygian cap, also called the liberty cap. In the Roman world, this cap was given to freed slaves as a badge of their new freedom. The French Revolutionaries adopted the cap as a symbol of their freedom from the Old Regime. Here is a typical image of  (virtuous) Marianne, cap on, leading the (diverse) common people (humanity) against tyranny: 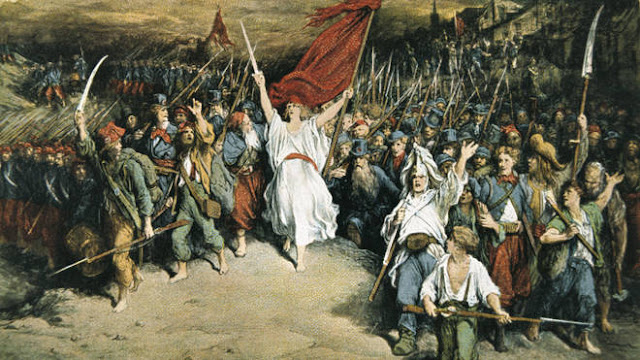 In the Nineteenth Century the cap of liberty came to symbolize democratic revolution. It can be found in many images in many countries. It almost made its way to the top of the U.S. Capitol. In the 1850's, the old capitol was redesigned to greatly expand it. This would include an enormous dome topped by a large sculpture. The original design of a figure to top the dome was a Marianne-esque maiden wearing a cap of liberty. Slave holders in Congress found this symbolism too threatening. Jefferson Davis, who was in charge of the rebuilding, nixed the idea; and we wound up with a generic maiden wearing an Indian headdress. Southern slaveholders were terrified of French revolution inspired violent uprisings. Find pictures and an article about this here . Even so, the cap of liberty appears many times in the sculptures and frescoes of the Capitol (in the dome ceiling, "Liberty," wearing a red cap, sits on the right hand of Washington who is rising to glory in the heavens).

Thus, the French Revolution taught people then, and for ages to come, we do not have to accept things just because they are there. All people are equally important, all entitled to the same dignity and respect. Guided by liberty, equality, and justice, the common person can make a better world for him or herself and his or her community.

The French Revolutionaries overthrew the Old Regime which was a controlling union of a small minority:  monarchy-church-aristocracy. This union oppressed and exploited the vast majority of the people:  middle class, working class, and peasantry, in order to finance the privileged lives of the few in the power structure. When the revolutionaries seized power, they chopped off the heads not only of the monarch and thousands of aristocrats, but also thousands of clergy. They outlawed the old Catholic church in the nation. One could argue the revolution was as much against old church as the old state. This was because state and church had merged and people saw the two of them as the same. In time, people in European countries, particularly the lower classes, had less and less attachment to religion so that today the continent is largely secularized and institutional religion has declined into relative insignificance. Absolute monarchy, parasitic aristocracy, and established church have all gone by the wayside.

The people who made the American revolution realized the danger of the union of state and church, and so the first part of the First Amendment of the Constitution, instituted in 1789, required the separation of church and state. This was a radical, and wise, departure from the past. It has worked to the benefit of both church and state.

This is why we should be concerned about the growing connections between church and state in this country. For a long time, churches have had tax-exemption status, something that is questionable under the First Amendment. Even more concerning is the funneling of tax-payer money into parochial schools, arguably a violation of the First Amendment. Now, we have billions of public money going directly to churches. This is alarming.

Under the recent pandemic bail out acts of the federal government, the Roman Catholic Church in the U.S. received $1.4 billion, that's billion, from the American tax-payer. Find an article about this here .  The Episcopal Church was right there too with its hand out. Five Episcopal dioceses applied for, and got, $1-1.5 million each in tax-payer funds. Many Episcopal dioceses and parishes received smaller payouts. I know that the Diocese of South Carolina was in on this but I do not know the amount yet. I am awaiting a report from the Small Business Administration on which churches in SC received covid money.

It is awfully tempting for churches to cozy up to secular governments and take money from them. However, I argue this is a very dangerous road to follow and the French Revolution is the best evidence of why we should not be going down it. The church of the Old Regime thought it was set forever, that nothing would ever endanger its privileged position of power. It was wrong, spectacularly. The union of church and state in the Old Regime all but destroyed the church in the Revolution and the time that followed. That is why churches today should resist the temptations of government money and keep themselves strictly separate from the secular state. If they give in to the state, they will become dependent on the state, and suffer the consequences of the loss of freedom and moral authority. The church was around a long time before the state appeared. It should remain around a long time after the state is gone.

Bottom line---churches should not be taking money from the government however they might rationalize it. Long-term loss will more than overwhelm any short-term gain.

If the French Revolution tells us anything at all, it is that we had better keep church and state completely separate.

So, tomorrow on Bastille Day, I will be remembering all those people who so long ago risked everything to overthrow tyranny and oppression. They had had enough of being treated like dirt and they took their welfare into their own hands. Those thousands of people marching in the streets nowadays are heirs of the French Revolution. They have had enough of the tyranny and oppression of racism, and they are not going to take it any more. I will be remembering them tomorrow too.