Greetings, blog reader, on this Monday, September 14, 2020. Here's a wish that you and yours are safe and secure as our long night of darkness continues. Our problems seem to be multiplying. Numerous out of control wildfires are ravaging California, Oregon, and Washington. Tropical Storm, soon-to-be hurricane, Sally is churning her way toward the central Gulf coast. The pandemic is running rampant still as people are falling sick and dying all around us. The failing economy is throwing millions of workers out of their jobs. Our streets are filled with people demanding racial justice. The political campaign is turning uglier by the minute. Parents are wracking their brains trying to decide whether to send their children back to school. Alas, even my team, Florida State, lost to Georgia Tech last Saturday (Bobby, we miss you, buddy). Enough already. All we need now is to break out in boils to wonder whether we really are Job. I for one am asking, whatever next?

As for TS Sally, my brother and sister live in Bay Saint Louis, Mississippi (as this a.m., to be the point of landfall). They are expecting up to ten feet [!] of storm surge and up to twenty inches [!] of rain. My brother's house, which is on the water, is on stilts ten feet above the ground. As you can imagine, everyone there is on pins and needles now.

PANDEMIC. COVID-19 continues to spread at about the same rate as last week with one significant change of a slight uptick of cases in Charleston County.

The spread in the United States is also showing slight improvement in the week of Sept. 7-14. There, 248,037 new cases were reported, a rate of 4%. This is down from the 5% of the earlier week. As for new deaths, 5,627 were reported in the week, a rate of 3%. This is the same rate as the earlier week. There are now 198,520 reported deaths of the pandemic in the U.S. At the present mortality rate, there will be around 300,000 Americans dead of the disease by the end of the year 2020. The United States has by far the most cases and deaths of this disease in the world. The U.S. has 4% of the world's population and 23% of the cases as well as 21% of the deaths. There is still no national policy to combat this disease. In fact, President Trump has said he is "down playing" the pandemic. We now know as a fact, from his own words on tape, that he and his administration deliberately refused to defend the nation against what they knew would be a contagious and deadly disease. This is a national scandal and humiliation.

POLITICAL. Another kind of storm is churning toward us, the impending national election of 3 November. The presidential campaigns are getting meaner by the day. President Trump said a couple of days ago he was now going to get "vicious." What does he think he has been so far, Mr. Rogers? I had better not get started on Trump right now, but I will let you know he did give me some good chuckles recently. First, he compared himself, favorably, to FDR and Winston Churchill. That was hilarious. (He was serious!) Next, he is telling his followers to expect twelve more years as president (unconstitutional) because he deserves it. Moreover, he wants to be added as the fifth president on Mt. Rushmore. Too, he insists he had done more for blacks than anyone since Lincoln. As a kicker, he was nominated for the Nobel Peace Prize. These are all hoots to everyone except him and his drink-the-Kool-Aid followers. After I stopped laughing about FDR and Churchill, I turned angry. Trump's name should never be mentioned in the same breath with those towering saints of the Twentieth Century who together saved civilization from a satanic apocalypse. Trump is the very antithesis of these monumental statesmen. Really, he is the worst president in American history, hands down. What closed the case was he himself in nine hours of tapes with Bob Woodward.

On another note, we now know, from the Church court filing of 10 September, that the Anglican Diocese of South Carolina and St. Philip's Church, of Charleston, each received over $150,000 in PPP government funds a few months ago. I also believe it to be true that the Episcopal diocese of SC and some parishes took PPP money, apparently less than $150,000 (the SBA did not list the PPP "loans" of less than $150,000).

This is wrong and, in my opinion, unethical. It is wrong for both the church and the state. It is bad for the church because it moves the Church toward a client relationship with the state. It is bad for the state because it violates the sacrosanct founding principle of the separation of church and state as enshrined in the First Amendment. As tempting as it is for churches to take tax-payer money, this road is fraught with dangers. To maintain full independence and integrity, every church entity should return the money they took under the PPP program. In fact, I am pleased to report that numerous churches across America did refuse to apply for the "loans," some even had changes of hearts and returned the money.

That is enough grumbling for the day. There are also lots of good and wonderful things happening all around us. I watched the service at Grace Church Cathedral yesterday and was heartened to see 35 people appear for confirmation. Even in this day of COVID, the church goes on, life goes on. And, that is what we must relish in this hard time. There is light in the darkness. One of my favorite places to go to reflect on these things is the garden of the Anniston Museum of Natural History, in Anniston AL. 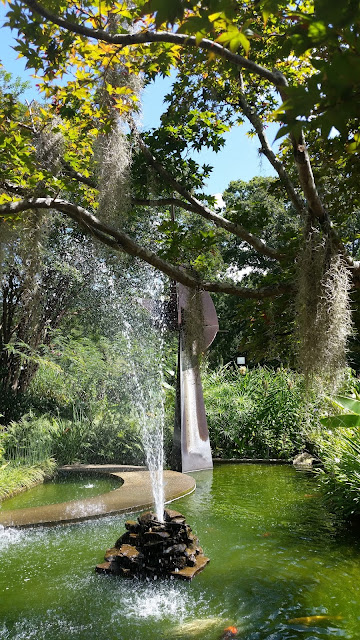 Ginger and papyrus line this pool. This little-known Eden has the largest collection of palms in Alabama as well as many rare and unusual tropical plants.

We are in a hard time; and let's not try to pretend otherwise. We have crisis on crisis besetting us. We wish it would all go away and everything would return to "normal." However, that choice is not ours to make. We are experiencing anxiety, fatigue, even fear. These are all natural and are to be expected. However, we must not let those feelings get the best of us. As Job, we cannot know now the reasons for all our sufferings, but like Job we will not waver in our faith and confidence in the God of the universe. As always, we should remember we are here for a reason and it is for the living of this hour whatever it may bring. Peace.
Posted by Ronald Caldwell at 6:19 AM