On, or just before, 28 February, the officers of the breakaway Diocese of South Carolina posted their new 2019 budget on their diocesan website.

On 1 March, Steve Skardon, at www.scepiscopalians, posted an analysis of the budget on his blog. Find it here .

Immediately thereafter, the DSC officers removed the 2019 budget from their website. If one goes to the website today, www.dioceseofsc.org, >About >Diocese >Budget, one will find the old 2018 budget, not the new 2019 one.

What is going on here? Good question. Obviously DSC officials suddenly decided they did not want the public to see their new proposed budget, at least not yet. They have less than two weeks before they have to present it to the diocesan convention. Of course, they do not have to post it on the Internet. They may keep it secret if they wish, as they are doing now. However, this only leads to suspicion that they are trying to hide something. The question remains, why did the DSC officers pull the 2019 budget from their website?

Perhaps Bishop Lawrence and his allies did not like the uncomfortable truths that Skardon easily revealed about the money shuffling going on in Coming Street. He showed, for instance, that last year DSC ran a huge deficit of nearly half a million dollars ($495,289) on a budget of $2,158,866. The shocker of this was that "legal expenses" totaled $969,186, or a whopping 45% of the entire year's budget! In other words, DSC leadership spent about half the diocesan budget on lawyers and the like! This is stunning. In 2019, they are asking $788,520 for legal fees out of a budget of $2,551,000, or a whopping 31% of the whole annual budget. In reality, the legal fees could easily go well over that before the year is out. Meanwhile, overall expenses in the budget jumped from $1,959,851 in 2018 to $2,551,000 in 2019.

In spite of this serious budgetary situation, cutting compensation to the top officials was not a priority in the new budget. In fact, the bishop, the canon to the ordinary (Jim Lewis) and the canon theologian (Kendall Harmon) are still doing quite nicely on their followers' money, thank you. Bishop Lawrence's compensation package totals $205,023, including a raise in salary. On top of that, he enjoys virtually free housing in the diocesan owned $2-3m property on Smith Street. The rent on such a place in downtown Charleston's skyrocketing real estate market could easily run $10,000/mo. Combining compensation and value of housing, Lawrence is enjoying a third of a million dollars a year from the diocese. On top of that, he may be drawing retirement from the Episcopal Church retirement fund (a generous plan) and Social Security. You do the math on what Lawrence's entire monthly income could be.

I just wonder how much longer the long-suffering, dwindling numbers of communicants in Lawrence's diocese are going to put up with their money being spent as this. We are in the seventh year of the litigation (which DSC started). There is no telling how many millions DSC has shelled out to lawyers. I expect $5m would be a conservative figure. And, the clock is still ticking.

What does DSC have to show for all the millions of their people's money they have spent? Answer = a diocese of six parishes. The SC supreme court has ruled 29 parishes and the Camp belong to the Episcopal Church. The circuit court is about to enforce that. The federal court is about to hand over the entity of the old diocese to the Episcopal Church. The millions of dollars that the faithful of DSC gave to their officials have in fact gained very little. Perhaps the DSC communicants should ask for their money back.

Actually, several parishes now held by DSC have announced they have suspended funds for legal fees. I just wonder how much longer it will take the rest to pull the plug on this money shredding machine.

Deleting the 2019 budget from the Internet does nothing to hide the truth from the people. At some point, the DSC officials will have to face the music of the expensive failure they have handed their trusting, faithful followers whom I suspect are rapidly approaching exhaustion in more ways than one. 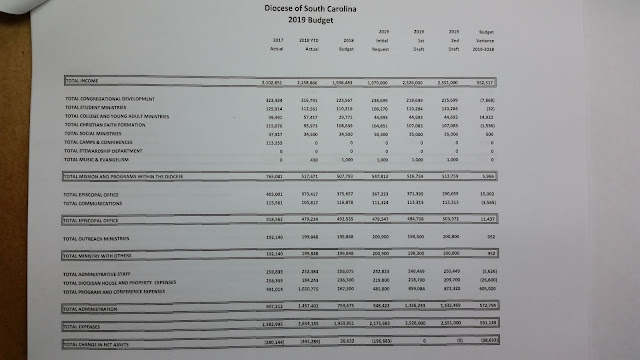 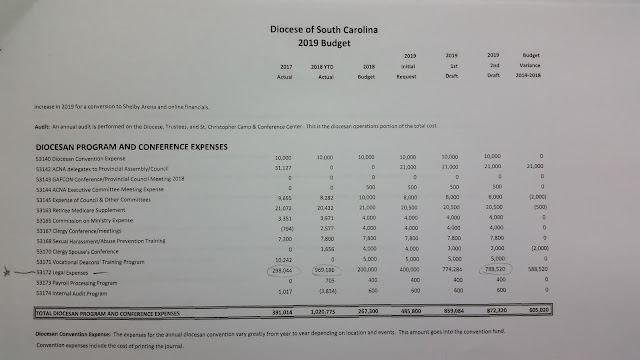 1:00 p.m.     It has come to my attention that the 2019 budget is still on the DSC website, just moved. It is no longer under "Budget," but is under the Convention information. To find the entire 2019 DSC budget now, click on here .
Posted by Ronald Caldwell at 8:03 PM