THE DIVINITY OF LIGHT

It was such a lovely spring day today that I could not resist the urge for a day trip, this time to Birmingham, an hour and a half away, and this time by train (I am a RR fanatic, but that is another story). Strolling leisurely around the downtown in the beautiful sunshine, I spied this across the street: 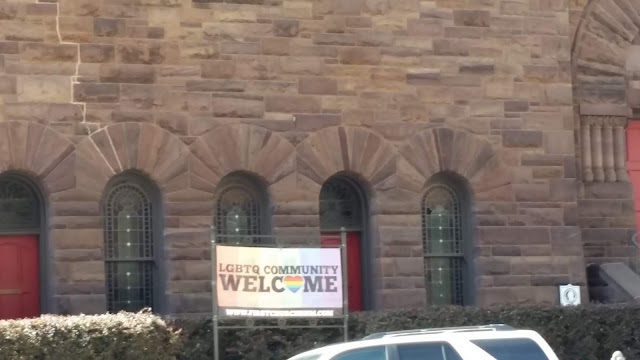 This is the front of the First United Methodist Church. The church is a venerarable treasure in the very middle of downtown Birmingham. It was finished in 1891; and is on the National Register of Historic Places. I had to go take a closer look. This is the sign up close: 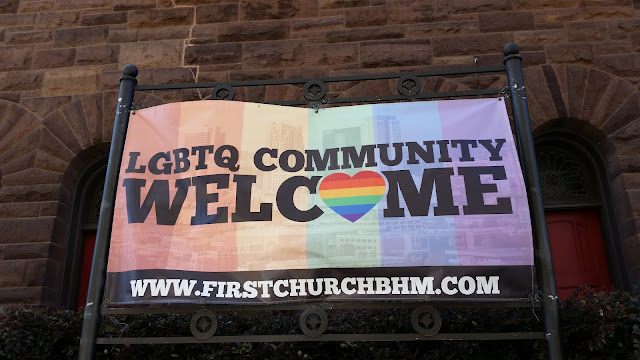 Well, look at this. The First United Methodist Church in downtown has put up a big sign welcoming LGBTQ people to the church. Note this is not a generic sign . It was especially made for the church because it has their web address. Then, I went around the other street side of the building, and there it was again: 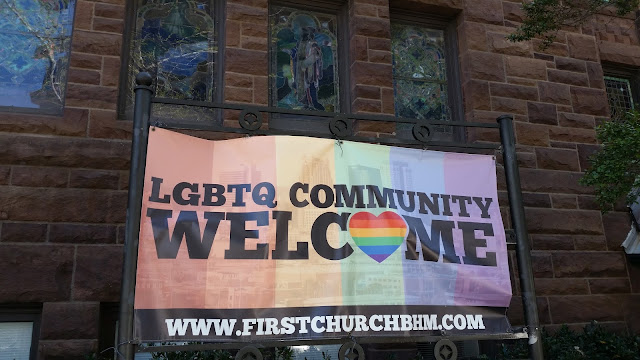 FMUC of Bham has two big banners out, one on each of the street sides, in the heart of downtown Birmingham. No one can miss them. I was instantly heartened. A brilliant spring day got even better. This made my day.

Several points struck me about this:

In the first place, FMUC is making a bold statement against the recent vote of their denomination to reject equal rights for and inclusion of openly gay people. In fact, the session reaffirmed the church's old condemnation of homosexual behavior, and even increased punishments for disobedience. They are saying to their fellow Methodists: In your face; We are going to do the right thing whether you do or not. We refuse to judge people; we refuse to condemn or exclude anyone. I say, more power to you First United Methodist Church of Birmingham, Alabama.

In the second place, what a difference a half-century makes. It was only a couple of blocks from here that in the darkness of 50-odd years ago Klansmen blew up a church killing four girls, and "law" officials perpetrated horrific violence, fire hoses and vicious dogs, on defenseless children who were only exercising their constitutional rights. All these years later, we know the demonstrators to be right and the "law" men to be wrong. The struggle for human rights is a long and hard one. This time people in downtown Birmingham are doing it the right way. Fifty years from now, society will understand that FUMC did the right thing.

In the third place, across the street from FUMC stands the old Alabama Power Company building. It is an art deco gem built in 1926. It is topped by a gilded statue officially named "The Divinity of Light." It is a 23-foot tall image made by sculptor Edward Field Stanford, Jr. Locals call her "Electra." She has lightning bolts in her hands and coming out of her hair. Electra has been en-"light"-ening downtown Birmingham for nearly a hundred years. 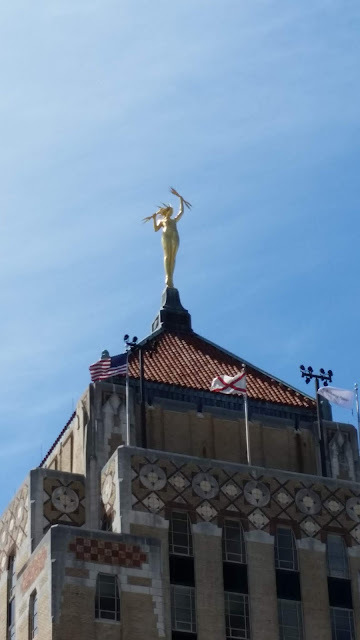 I would like to think Electra enlightened the people across the street in the FUMC but I really do not think that. I believe their hearts were enlightened by a profound religion of love which they have incorporated into their lives. I think it was God who gave them that light, not Electra. I just could not resist the poetic irony of light shining on the good people of this church.

Just one block over from FUMC stands another landmark church of downtown Birmingham, the Episcopal Cathedral Church of the Advent. I walked over there and found no banner welcoming anyone, not that I was expecting one. In contrast to FUMC, the clergy and leadership of Advent are frequent critics of the policies favoring equality for and inclusion of openly homosexual people in the church. In fact, when the Episcopal Church affirmed Gene Robinson as a bishop in 2003, the first openly gay bishop in TEC, the dean put out a black flag on the front of Advent as if in mourning. From the black flag of 2003, we now have the rainbow flag of 2019 a block over. At least we are moving in the right direction.

So, a big "thank you" to the people of the First United Methodist Church of Birmingham. You are on the side of history. Your are on the side of light. Even more importantly, in my opinion at least, you are on the side of the Gospel of Jesus Christ. All people are made in the image of God. We are called to love God and our neighbors, no exceptions, no exclusions. That is the true divinity of light, or, perhaps we should say the light of divinity.

Posted by Ronald Caldwell at 6:11 PM