As the year 2019 approaches an end, I have been thinking about the most important people in the history of the schism in this year. I came up with an impressive list, but there was one name that stood out far and away as the most important. Therefore, this person must be singled out for his transformative contribution to the settlement of the legal war in the schism.

Under the power invested in me by the Internet, I proclaim and declare the Person of the Year for 2019, in the history of the schism in South Carolina, to be: 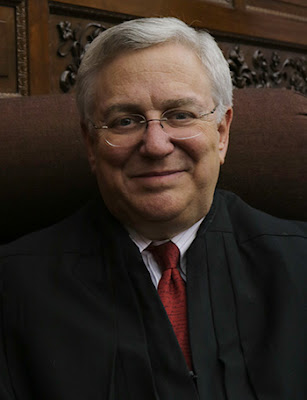 I must admit to start with that I am partial to Judge Gergel because he is not just a great jurist. He is a fine historian. If you have not read his recent book, Unexampled Courage, The Blinding of Sgt. Isaac Woodard and the Awakening of President Harry S. Truman and Judge J. Waties Waring, you should. It will turn your stomach, break your heart, but ultimately leave you with admiration for those in authority who resolved against the odds to do the right thing. Judge Gergel is following in their footsteps and we are the beneficiaries.

As we learned this year, Judge Gergel is the epitome of learning, wisdom, clarity, and efficiency. Are not these basic qualities we all want in our judicial system? He did his best to end the tragedy of the legal war stemming from the schism. For that alone we should all be grateful.

The breakaways are at a loss to blame his decisions, that went against them, on some some perceived prejudice, as they did with Justice Kaye Hearn of the state supreme court. In that case, they claimed her opinion must be ruled invalid because of her membership in a local Episcopal church. Judge Gergel, as they say, has no dog in this hunt. Concerning the Episcopal Church schism in South Carolina, he is as impartial as a judge could be.

Judge Gergel's magnum opus of 2019 was his landmark decision "Order and Opinion," issued on September 19. This is by far the greatest court judgment in the seven-plus years of the schism. It is a model of erudition, wisdom, comprehensiveness, and judicial rigor. Moreover, it is all written in plain English that anyone can understand. The judge definitely has a gift of writing well. This is refreshing in a world where so much legal writing is in impenetrable legalese.

Judge Gergel really settles the whole war of litigation in this 73-page masterpiece. We must not underestimate the importance of this work. This is the first federal court ruling on the relationship between the Episcopal Church and its dioceses. It is almost certain to stand up under appeal. If so, it will become the law of the land on the issue of Church-diocesan connections. It is a great landmark in American jurisprudence.

Judge Gergel went on to make several other crucial decisions in this paper. He recognized the authority and validity of the South Carolina Supreme Court decision of August 2, 2017, primarily the point that the Episcopal Church diocese was the one and only heir of the historic diocese. He also recognized the majority decisions of the SCSC decision, particularly that the Episcopal Church is the owner of the parishes in question. Moreover, he emphasized the Church diocese was the owner of the trademarks both nationally and locally.

At the end of the September 19 Order, Judge Gergel issued a permanent injunction banning the disassociated entity from using the names and emblems of the historic diocese.

Probably anticipating an appeal, Judge Gergel cleverly weaved arguments in the paper to make it virtually appeal-proof. He brought up Fourth Circuit decisions an astounding twenty times in his Order. Thus, he has already laid out for the Fourth Circuit justices what their positions should be in case of an appeal. Sure enough, the disassociated entity's lawyers have appealed Gergel's Order to the Fourth Circuit Court of Appeals. In my view there is almost no chance the Fourth will overturn Judge Gergel's masterpiece of jurisprudence.

For whatever reasons, the disassociated entity immediately began to comply with Judge Gergel's injunction against them, at least to some degree. Also, their lawyers did not file for a stay of the Order, at least not right away.

Then, things began to change. The disassociated organization, now calling itself the Anglican Diocese of South Carolina, continued claiming to be the historic diocese or at least sharing the identity of the historic diocese in direct violation of Gergel's Order. Then, the Episcopal Diocese of South Carolina's lawyers had enough. On November 11, they filed a complaint with Judge Gergel listing the numerous ways ADSC remained in violation of the injunction. The main argument was the point about historical identity.

After this, the ADSC lawyers decided, more than a month after the fact, to file for a stay with Judge Gergel. The judge would have none of it. A few days after the EDSC lawyers filed their last complaint against ADSC, Judge Gergel issued a new "Order and Opinion." Scarcely veiling his irritation with ADSC, Judge Gergel issued a 20-page judgment on December 18 spelling out in no uncertain terms orders to ADSC to obey the law. He did allow the ADSC group to keep their chosen name, but in every other instance he ordered them to stop using the names, emblems, and most of all historical identity of the true Episcopal diocese. It was the historian in Gergel that came out the clearest in this paper. He seemed truly offended that the breakaways had not obeyed his direction on historical identity. In the new paper, he made it crystal clear that the breakaways could claim no existence in any way before October of 2012.

ADSC began removing more of the website violations of the injunction.

What makes Judge Gergel stand out even more is the contrast to the state court judges in the year. Judge Edgar Dickson, of the first circuit state court was assigned the Remittitur of the South Carolina Supreme Court decision of August 2, 2017. He has had the case before him for two years and has done virtually nothing to implement the SCSC decision. He spent all of this year in back and forth marking time and doing almost nothing toward this assignment. He held two hearings that accomplished nothing. In apparent desperation to be rid of the case, he called for mediation which everyone else knew would be doomed. Sure enough, it was. He is now calling for proposed orders on ADSC's motion for clarification of jurisdiction. In this, ADSC is asking Judge Dickson to discard the SCSC decision and declare on his own that the 29 parishes own their properties without trust control. The fact that he would even be entertaining a motion to set aside the SCSC decision suggests his reluctance to recognize the majority orders in this SCSC decision. Where Judge Dickson is going with all of this is anyone's guess. So, we have Judge Gergel, the model of efficiency, and Judge Dickson, who, well, seems lost at sea, at least in this year. What a contrast.

After more than seven years of legal war, everyone is exhausted and longing for closure and peace. It is a scandal this disagreement had to go to court at all. However, at along last, we have a judge who is masterfully guiding this disaster to a conclusion. Too bad it took so long to get him on the stage. Nevertheless, we should all be grateful for the work of a great jurist in Charleston. U.S. District Judge Richard Gergel is, hands down, our person of the year.

Posted by Ronald Caldwell at 11:04 AM