IT IS TIME TO REMOVE
THE CONFEDERATE MONUMENTS 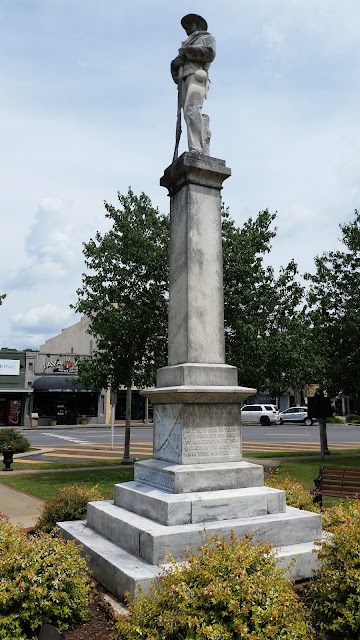 Confederate monument, Jacksonville AL, erected 1909. The generic Johnny Reb is almost always facing north. This memorial, in the middle of the town square, is the very center of the town.

For several years there has been a movement in the south, and other places, to remove reminders of the Confederate States of America. This has accelerated in the last couple of weeks in the course of the anti-racist demonstrations sweeping America. In the last few days in Alabama, the two largest cities have removed their prominent Confederate memorials. All across Alabama there have been marches and demonstrations demanding the removal of all of 109 public memorials to the Confederacy. There was even one in the small town of Jacksonville. There are 112 Confederate monuments in SC.

What was the origin of the ubiquitous Confederate memorial? Most of the public space monuments, as the one above, were erected between 1900 and 1920 by Confederate descendant groups, as the United Daughters of the Confederacy. They were put up to memorialize the fathers and grandfathers who fought in the Civil War and who were beginning to die off. Too, they were not so subtle signals to the blacks of the ongoing racial divides. The years 1900 to 1920 brought the height of the Jim Crow era when lynchings were most common. This was arguably the most racist time in the south after the Civil War. The Ku Klux Klan saw its largest membership in the 1920s.

Now, I want to talk as a white southerner whose heritage goes back in the south to the late 1600s when my earliest ancestors from Europe arrived in Virginia. All of my forebearers who were alive at the time supported the Confederacy. Some of them fought, and some died, in the Civil War. They were ordinary small farmers who were all entirely locally-oriented. My ancestor soldiers believed they were fighting to protect home, family, and community.

What were the goals of the Confederacy in the Civil War? It was fighting for two self-evident aims, to create a new country of slave states and to defend slavery on which the economy, indeed the whole way of life in those states, rested. The Confederate constitution made it virtually impossible for a slave owner to free his or her slaves. The first (new country) would have been a tactical disaster. The second (slavery) would have been a moral catastrophe.

We can see today that neither of these goals was a noble or morally justifiable cause. Breaking up the United States and defending slavery were wrong on so many levels. However, to rationalize their ancestors' sacrifices and to keep blacks down in second-class citizenship, southern whites created a romanticized version of The Lost Cause after the war (as evidenced in the book and movie "Gone With the Wind"). Then, they erected large public monuments in the most conspicuous public places of the civil community to glorify the Confederacy. In-your-face promotion of the Lost Cause was glorifying slavery which was the worst kind of racism. For decades to come, southern blacks had no choice but to endure the hateful reminders of the continuing crushing discrimination against them. It was not the monument itself that was so much the problem as where it was located. Sponsors always put them in the most prominent and dominant places of the open civic spaces as town squares, parks, courthouse grounds and the like. The placement itself was a powerful message.

So, the question now, in 2020, is whether we southerners should remove these Confederate monuments. I say yes. Let me explain.

The monuments were erected to promote southern white racism. They were meant to dominate the civic spaces as reminders of racial oppression. These powerful symbols played a useful part in bolstering Jim Crow. The monuments were not so much memorials to the soldiers of the Civil War as they were tools to retain social control over blacks. They should not dominate our public spaces now as we southerners try to build a more free, egalitarian, and just society.

The monuments should not be destroyed à la the Taliban. No, we should not smash them. We should remove them from their places in the public spaces and relocate them to historical parks, museums, cemeteries and the like. They are an indelible part of our past in the south and we should come to terms with our past--all of it. We should keep them as irreplaceable, teachable relics of bygone days. If we are ever going to have a truly egalitarian and just society, we southerners must come to terms with our racist past. There is no way around it. We have a lot of work to do.

So, I say it is time to remove the Confederate monuments. They have had their day. We should protect and preserve them as the important objects they are. However, we should recognize them for what they are, "monumental" reminders of a dark and racist past.
Posted by Ronald Caldwell at 6:01 AM