It is time for our weekly review of the COVID-19 pandemic. The big news of the day is the alarming spread of the disease in South Carolina. The state is rapidly becoming one of the hottest spots in the United States. Cases and deaths in SC are escalating far above the national average. It is time for the authorities in SC to take drastic measures to contain the spread of this highly contagious and deadly plague. If they do not, we can expect only more of the same and soon the people of the Palmetto State will be paying a very high price.

First, let us look at the statistics in Worldometer for the world. In the past week (June 17-24), there were 1,093,387 new cases reported, a rise of 13%. This is roughly the same percentage rise for each of the past four weeks. Thus, there is no mitigation in the spread of the disease in the world as a whole although different places have different results.

As for deaths in the world, there were 33,727 reported in the last week, for an increasing rate of 8%. This is the same rate as the week before and roughly the same for the past four weeks. Again, there is no relief in the mortality rate in the world. The disease is killing app. 5,000 people a day.

The United States continues to be the epicenter of the pandemic with no sign of this changing. The U.S. has by far the largest number of cases and deaths in the world. In the last week, the U.S;. reported 216,007 new cases, for a rising rate of 10%. The week before it was 8%, and the two weeks before that, 9%. Thus, figures show the disease is increasing its spread in the U.S. although this is uneven. The northeastern states are declining while the southeastern and western states are increasing.

As for deaths in the U.S., there were 4,343 in the last week, for a rise of 4%. The total deaths in the U.S. now stands at 123,476. The week before, the death rate was also 4%. This is actually a decline from the rate of 7% from four weeks ago. On the whole, for the past four weeks, there was a steady decline in both the numbers of deaths and the rates for the whole country.

Alabama is faring only slightly better. In the past week, it saw 4,185 cases, a rising rate of 16%, for a total of 31,097. This is a decrease from the week before (5,470, 26%). In the past four weeks AL has jumped from 18,771 cases to 31,097. As with SC, this alarming climb calls for some serious action to contain this virus. Unfortunately for both states, the public policies and procedures are the exact opposite. Authorities are "opening" practically all public places; and my observation is that most people are oblivious to the health danger all around them.

The conclusion we should draw from all these numbers is that COVID-19 is spreading rapidly, at least in our local states, and there is no sign of pubic measures to prevent this. There is no political will to take restrictive action. Therefore, there is no reason to think this plague will do anything but get progressively worse for the foreseeable future. Dr. Fauci said just yesterday that the earliest we could have a vaccine is seven months off. Bottom line---things are going to get much worse and at Christmas we will look back wistfully on the low numbers of June.

Now, changing subjects, I am still dumbfounded at Judge Dickson's outrageous order of last Friday. I am struggling mightily to rationalize it but I am not getting anywhere. The more I study the Order, and the remarks coming from the breakaway side, the more I am confounded by it all. Alice in Wonderland comes to mind.

When I was a graduate student, my professors demanded any work be based on original documents. I spent four months in Paris buried in les Archives nationales pouring over countless original documents of the French Revolution. I was privileged to be allowed to handle priceless papers as those of the trial and execution of Marie Antoinette. When I defended my dissertation, the main challenges were on my sources. The greatest thrill of that day was when one of the panel declared my work "dazzling." But I digress. The point is, the truest understanding of the past must come from the original documents.

So, I keep going back to the original documents in the church case. From the South Carolina Supreme Court, the two key documents were the court's decision of August 2, 2017, and its order of Remittitur of November 17, 2017.

The last two of the seventy-seven pages of the Aug. 2 decision (click on image for enlargement): 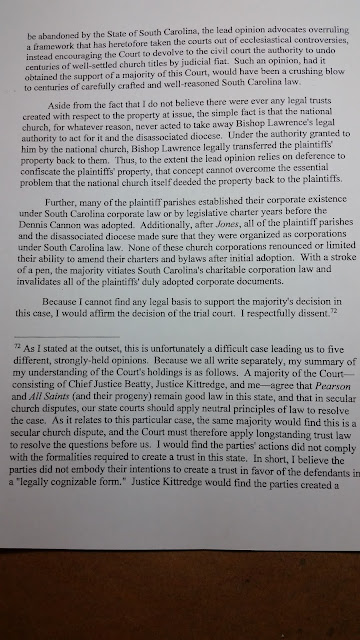 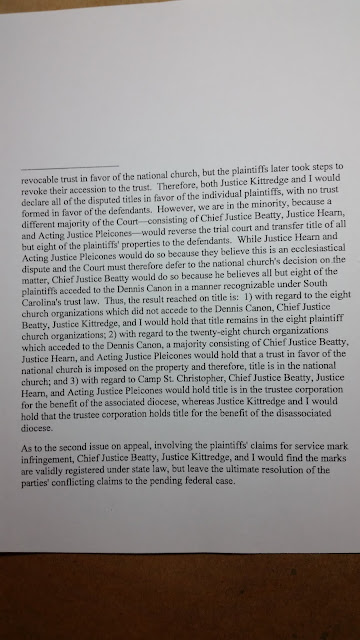 This was written by Jean Toal. She was Chief Justice when the case reached the SCSC; and assigned herself to be the lead. On page 76, she is finishing her 30-page "Opinion." She explained her reasons for dissenting from the majority. Finally, on pages 76 and 77 she summarized the court's decisions. Her words are perfectly clear. She lists 1, 2, 3 the majority decisions. They could not be plainer or clearer. The court found that 28 parishes were property of the Episcopal Church and the Camp was property of the Episcopal Church diocese.

The next key document is the Remittitur: 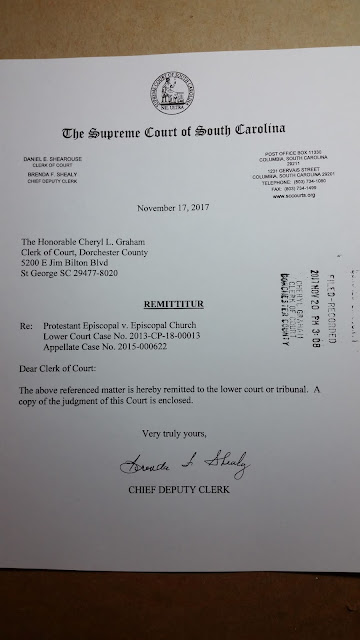 Note that the word "Remittitur" is in large, bold, underlined caps. As I understand it, the SCSC had two choices at that point. It could have issued a Remittitur or a Remand to the court of origin. An order of Remand would be a direction to the lower court to retry or reconsider all or parts of the case. The SCSC did not send a remand. They sent a remit. Surely this was a clear direction from the SCSC to the circuit court to implement the majority decisions clearly listed on the last page.

So, even a cursory study of the documents brings us to only one reasonable conclusion about the intent of the state supreme court and the task of the circuit court.

The breakaway side is now making two assertions that conflict with the original documents. One charge is that the SCSC did not resolve the case but made five separate opinions; and this required the circuit judge to discern the resolution by deciphering the "Collective Opinion" of the whole Aug. 2 Opinion as an aggregate of the five. It is true the justices wrote five separate opinions. It is not true they drew five separate conclusions. In fact, the document states clearly three majority decisions. The other misinterpretation is that he SCSC remanded the case to the circuit court. The Remittitur speaks for itself. The SCSC did not direct the circuit court to retry the issues in the case because the issues had been resolved.

So, if we go back to the original documents, we have to conclude that Judge Dickson's order cannot be sustained. It fails to recognize the plain reality of the documents he had been given.

As a side point, I am researching the structure of the South Carolina state courts. So far, what I have found is, well, unsettling. Two words stand out about the state courts: politics and secrecy. This may help us understand why we have the decisions we have coming from the state judges. I will report back when I have finished my investigation.

Keep in mind, friend, we are where we are for the living of this hour, as mind-boggling as it may be. Peace.

UPDATE. The governor of New York announced this morning that travelers entering NY, Connecticut, and New Jersey from South Carolina and Alabama are required to quarantine for fourteen days.

Posted by Ronald Caldwell at 9:58 AM