BUDGET WOES OF THE ANGLICAN DIOCESE OF SOUTH CAROLINA

The Anglican Diocese of South Carolina recently released its 2020 budget. Find it here . It reveals a worsening financial state of the diocese. It also shows the diocese received $121,000 from the federal government under the PPP, earlier this year. Individual parishes of ADSC may have received PPP "loans" too but I have no data about this. The PPP grants were given to businesses (and churches) to keep personnel on the payroll for a specified amount of time. If the recipient adhered to the conditions, the "loan" became a gift---from the American taxpayers. Since churches were allowed to apply under the program, a great many did. Some Episcopal dioceses and parishes applied, and got the loans (I do not have the data on the Episcopal diocese of South Carolina). Media outlets have reported that by far the greatest church recipient of PPP was the Roman Catholic church which raked in a mind-boggling $1.4b under the program.

The expenses of the ADSC are overwhelmingly the results of the schism and the stipends of the diocesan officers. The estimated legal fees in the 2020 budget are listed as $566,350. This is by far the largest single expense. It amounts to 25% of the budget. And, this is just an estimate. The actual figure could be higher, especially considering active cases in both major federal and state courts. The next highest expense is payment to the Anglican Church in North America. ADSC is handing over $181,151 to ACNA. This is more than three times as much as the pre-schism paid to the Episcopal Church in one year. Thus, a third of the ADSC budget goes to aftereffects of the 2012 schism.

How much has ADSC spent on legal costs? No one knows for sure since the details are never revealed. However, if we estimate a conservative figure of $500,000/yr. this would come to $4m since the schism. The individual parishes are paying their lawyers separately. If they are paying, collectively, the same, this would mean the people of the ADSC have paid $8m in legal fees since the schism of 2012. I expect this is a realistic figure. Whether this is money wisely spent is another issue.

Next to the costs of the schism, the budget is top-heavy with salaries for the administrators: the bishop, the canon to the ordinary, the communications director, and the part-time "Canon Theologian." Showing how dire things are, Bishop Lawrence actually took a cut in salary, for the first time ever. His compensation package dropped from $205,023 in 2019 to $180,662 in 2020. This is a cut of 12%. However, if we figure in his free housing, his income remains remarkably high. The bishop's residence, in pricey downtown Charleston, (that legally belongs to the Episcopal diocese) is worth around $2m. This would mean an annual rent of $120,000 ($10,000/mo.). All in all, Lawrence is enjoying nearly a third of a million dollars in income value yearly. Moreover, Lawrence is eligible to receive handsome payments from the Episcopal [!] Church retirement fund and Social Security. You do the math and draw your own conclusions about Lawrence's income.

The next two highest salaries in the diocesan administration did not take cuts. The Rev. Jim Lewis, the Canon to the Ordinary, keeps a nice pay package at $123,056/yr. Joy Hunter, the Director of Communications gets $81,683 in her compensation. Then there is the part-time "Canon Theologian." No one is quite sure what he does for his income, but he took a 17% cut, from $39,027 in 2019 to $32,336 in 2020. The fact that the bishop and the canon theologian would take such significant cuts is clear indication of financial troubles in their institution.

To be sure, this year is not an ordinary one and we should not make too much of budgets right now. Every church I know has troubles in this time of COVID-19. Everyone is struggling to match income and outgo. Nevertheless, it is true that the trajectory of the Anglican diocese since the schism is downward, in both membership and finances. I expect this will only get worse. Chances are it will lose in both state and federal courts and that will mean it will have to turn over the diocesan assets to the Episcopal diocese and the 29 local parishes to the Episcopal bishop. Then, what happens to this experiment in religious differentiation is anyone's guess. I think we can safely assume its future does not look good.

Now, back to my garden that is in its autumnal glory. Here are some of the sights these days: 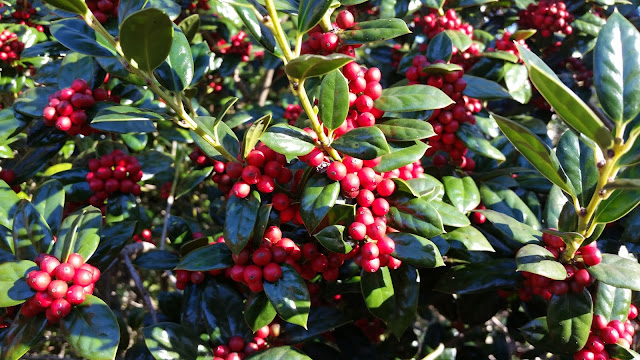 Dwarf Burford Holly (Ilex cornuta 'Burfordii Nana'). The holly family is one of the best for ornamental horticulture. I have more than a dozen forms of hollies and all are flourishing. This one is loaded with red berries. I share cuttings with my neighbors for holiday decorations. 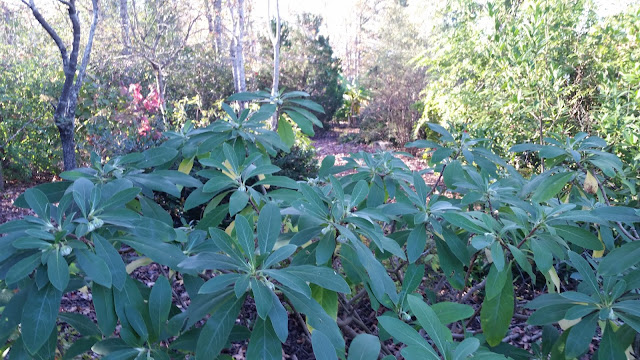 Paper Bush (Edgeworthia chrysantha). An unusual, and much under-used, garden deciduous shrub. As the leaves drop, the bell shaped flowers remain making it one of the few deciduous shrubs to bloom throughout winter. In ancient China, the bark was used for making paper, hence the name. 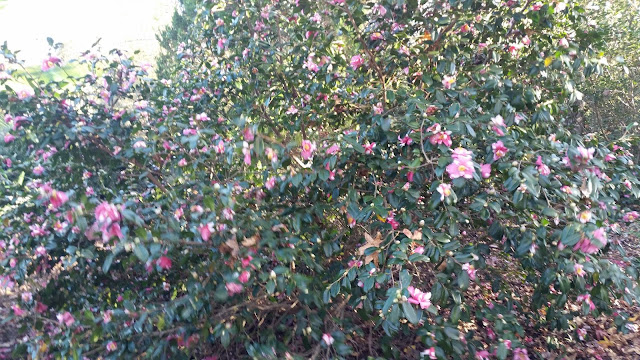 Winter's Fire Ice Angels Camellia. This fully mature shrub, at 6', is a prolific bloomer. Since we have not had a killing frost yet, this bush is doing its best to show off its countless pink and white flowers.

Posted by Ronald Caldwell at 1:27 PM