A DEATH IN THE FAMILY

It is with sadness that I report the death of Dolores Miller, of Florence SC. Along with our sorrow, however, is our love, gratitude, and admiration for a life well lived. I expect every Episcopalian in Florence would agree she was the mainstay of the church there. She will be greatly missed. 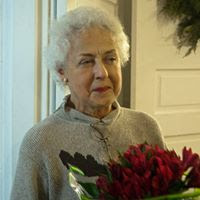 Before the schism, Miller was active for years in the life of the parish of St. John's, of Florence, and the diocese of South Carolina. At St. John's, she served as senior warden and vestryperson. Her goal was to do what she could to keep the parish and the diocese in the Episcopal Church; and on this she had to struggle against the rising tide sweeping the diocese out to sea. She remained undeterred. She refused to give in or to give up. In the wake of the Bishop Robinson controversy that greatly boosted the schismatic movement in the diocese, the church loyalists in the diocese formed the Episcopal Forum. Miller was right there as an early officer. At about the same time, in 2004, Bishop Salmon set up a diocesan "Reconciliation Commission" under the chairmanship of the Rev. Dow Sanderson. Miller was right there, as one of one of the twelve members of the committee. Unfortunately, that Commission failed. It was washed away in the rising tide of secession. Miller remained undeterred. In early 2012, when attorney Melinda Lucka brought together her coalition of 24 signatories to present their complaint against Bishop Lawrence to the Disciplinary Board for Bishops, Miller was there to sign her name. This presentment did in fact lead to the official charge that Lawrence had abandoned the communion.

Many people probably remember Miller best as the little white-haired lady who gave the "roasts" of the bishop in the annual diocesan conventions when she presented the official response to the bishop's address. Her sharp but good-natured ribbing of the bishop left everyone in stitches. Miller's absence in the convention session this year was noticeable.

My first, and lasting, impression of Dolores Miller came in another context. I happened to be visiting my daughter in Florence when Bishop Lawrence appeared in St. John's church for a "forum" on October 28, 2012, just thirteen days after he had been "restricted" by the presiding bishop and ordered to refrain from all functions of ministry pending the resolution of the charge of abandonment. Lawrence had ignored the restriction; and the diocesan authorities had announced the diocese had "disaffiliated" from the Episcopal Church. Here was Lawrence at St. John's ready to administer the sacrament of confirmation to a new class. I went to the forum and sat a couple of seats over from Miller. Here is how I describe the forum in my book A History of the Episcopal Church Schism in South Carolina (p. 378-79):

"This author attended Lawrence's forum at St. John's on October 28. While he cannot say for sure, he can only imagine this was typical of Lawrence's bishop's forums around the diocese at the time. Lawrence spoke briefly in a somber, serious tone appearing rather sad and tired. His speech was replete with military metaphors: e.g., the Episcopal Church had fired a "missile" that had led to "all out war." It was clear that he saw this as the war of a lifetime, a life-and-death struggle between good and evil. He remarked that Nick Zeigler's funeral, which had been in St. John's, was "providential" because it kept him from having to meet with the presiding bishop. The following question-and-answer period went off on many different topics. At one point, Lawrence declared, "I am no longer an Episcopalian" to the murmuring approval of the audience. He spent a great deal of time on sexuality and seemed most concerned that he had met two transsexual priests at the Convention. Referring to the blessing of same-sex unions and equal rights for transsexual persons, Lawrence said "the canons of the Episcopal Church have gone where no civilization in history has ever gone." On one question about keeping the property, he said anyone could follow the buildings if they wanted. He did not guarantee them they could keep the property. When asked about ongoing negotiations with the Episcopal Church, Lawrence seemed evasive. He did not say that talks had broken off for good. It was clear from the audience reaction that this was a mostly supportive crowd, but not entirely. One person, Dolores Miller, arose to confront Lawrence. She asked him on what authority he was acting since he had been inhibited. He corrected her that he had been "restricted" [a distinction without a difference] and added that he was there as a bishop in the one holy, catholic, and apostolic church which no restriction could affect. When Miller remained standing and continued asking pointed questions, Lawrence grew annoyed and became short and testy. After the audience began to grow restless and murmur disapproval of Miller's persistent line, Haigh Porter arose to make a tearful appeal that they should love one another above all. It was clear that this group was in a good deal of emotional pain and anguish as longtime friends were about to part from one another. Lawrence looked on impassively. Finally, a man arose to ask of Lawrence the question on everyone's mind, "Shepherd, where will you lead us from here?" It was the best question of the day. The crowd fell hushed in eager anticipation. Lawrence made a vague, rambling response, maybe here, maybe there. His lack of clear vision did not matter. Most of the crowd stood and clapped loudly in approval. It was clear that Lawrence did not have to worry about the loyalty of this parish. Lawrence proceeded on to preside over confirmation for a large class without telling them they were not being confirmed in the Episcopal Church."

On that day, Dolores Miller was the only one in that audience of one hundred people to confront the bishop to his face, the only one to speak truth to power. She knew that her beloved church, St. John's, was about to vote to leave the Episcopal Church (it did soon thereafter by some 80%). She was not there to change the impending vote. She was there to speak the truth. She felt it important to make Lawrence explain himself. She stood up to him and refused to sit down until he answered her questions which went on and on. It was obvious that he was not used to being challenged like this and he did not take it happily. At one when she was particularly persistent, Lawrence shot back at her testily, "Do you want an answer?! Do you want an answer?!" Their contretemps ended as Lawrence remarked that God's will would be done. To that, Miller responded confidently, "Yes it will," as some listeners audibly gasped. If we can take the state supreme court to be God's will, it was Miller and not Lawrence who won in the end.

St. John's has struggled in the Lawrence years. In 2008, when Bishop Lawrence arrived, it had 503 communicants, in 2011, 453, and in 2013, 375. Thus, from 2008 to 2013 it lost 25% of its communicants. Looking at the year of the schism, the communicant number went down from 453 in 2011 to 375 in 2013, a loss of 17% as a direct result of the schism. St. John's budget has also struggled even though it may be drawing from the Douglas Trust that was set up to provide money to the parish as long as it remained in communion with Canterbury which it is not now. St. John's of Florence is one of the six local churches that the state supreme court has recognized as being independent of the Episcopal Church. What will happen after the courts finally settle all in favor of the Church and its diocese, only time will tell. The decline of a parish, the decline of a diocese, is no comfort to anyone.

In December of 2012, shortly after the parishioners of St. John's voted to leave the Episcopal Church, Miller was there again, resolutely leading a dozen intrepid Episcopalians to meet in a living room and reorganize. She worked tirelessly to serve the fledgling congregation. No job was too big or too little for her to do. In no small part because of her work, the faithful few soon grew into a vibrant and sizable community and chose a new name, St. Catherine's in honor of St. Catherine of Alexandria. They were admitted as a mission of the Episcopal Church diocese in 2014.

Today I am lost in admiration and gratitude for the life of Dolores Miller. She fought the good fight. She refused to be vanquished. She kept the faith. And so, she has joined the great cloud of witnesses. She has been enveloped in the arms of the church to live on forever among the faithful in Florence and in South Carolina.

Almighty God, you have surrounded us with a great cloud of witnesses: Grant that we, encouraged by the good example of your servant Dolores, may persevere in running that race that is set before us, until at last we may with her attain to your eternal joy; through Jesus Christ, the pioneer and perfecter of our faith, who lives and reigns with you and the Holy Spirit, one God, for ever and ever. Amen.
Posted by Ronald Caldwell at 4:43 PM