I regret that I was unable to attend the hearing. To those of you who kindly asked about my health, it is fine. Thank you for asking. My inability to attend came from other issues.

I  must insert a caveat here. Since I was not in attendance at the hearing yesterday, I am relying only on my interpretation of the first-hand reports posted on the Internet. I cannot vouch for their accuracy.

The three reports are quite different. The two from the dioceses are naturally favorable to their sides. The "Anglicans" wrote:  "Our lawyers also argued persuasively that the Diocese successfully withdrew from TEC with its property interest intact in compliance with South Carolina state law." Really? Have you read the SCSC decision and federal Judge Richard Gergel's order?

Over on the Episcopal side, the lead lawyer, Thomas Tisdale was quoted:  "'That was the most substantial hearing we have had to date with Judge Dickson on this case.'" I wish he had identified the "substance."

The only independent report we have, from scepiscopalians, holds a very different picture of the proceedings with points for and against both sides.

So, looking at these three reports, this is what happened and did not happen in yesterday's hearing:

1)  Judge Dickson asked the two sets of lawyers to submit proposed orders on ADSC's Motion for Clarification of Jurisdiction (this motion essentially asked the judge to discard the SCSC decision and decide on his own the property issues.)

2)  Dickson did not make any other decision.

3)  Dickson focused on one motion, the ADSC's motion on clarification. He did not consider any other motion now before him. EDSC has three outstanding motions.

5)  Dickson did not set any timetable for the future. He asked the lawyers to work together on a time for submitting the proposed orders.

Scepiscopalians reported that the judge indicated he would consult the justices of SCSC for "clarification" although he left all this vague:  "Dickson announced at the end of today's hearing that he was going to send a request for 'clarification' to the justices of the high court after getting input from both sides, but was not specific about what he wanted to ask them."

So, what should we make of all this? What should be our takeaways from yesterday's hearing? Where does the church case stand now? Here are my thoughts:

1-- Judge Dickson made no decision that necessarily has any impact on the case.

2-- Dickson focused on the "Anglican" petition and not on the three Episcopal motions.

4--  According to the EDSC report, Dickson asked that the proposed orders "address 'how we got here,' the law of the case, and findings specifically supported by court records." All of this is irrelevant to his assignment. The SCSC gave the circuit court a Remittitur to implement its Aug. 2, 2017 decision. How that decision came about, how the justices arrived at their decisions are all beside the point now and are merely time-wasting gestures. The only points that are relevant are the three majority decisions on the last page of the Aug. 2 opinion.

5--  Dickson is still refusing to implement the SCSC decision and is making a smoke screen of diversions even if this is unintentional.

5-- The hearing changed nothing of substance.

Judge Dickson has had this case for nearly two years. The SCSC sent the circuit court a Remittitur to implement its Aug. 2, 2017 decision recognizing Episcopal Church ownership of 28 parishes and the Camp. Dickson has not implemented the decision.

In all this time, Dickson has made exactly one decision, to recognize the eight parish entities listed in the SCSC decision as sole owners of their property. This he did in the second hearing. By this, he gave recognition to the SCSC decision itself but still ignored the two orders in it favorable to TEC.

So, what was the point of yesterday's hearing? One wonders. Recall that the Episcopal side lawyers sent Dickson two letters asking for a hearing on his denial of their motion for dismissal of ADSC's Betterments suit. It seemed to me there was a widespread belief that this was preparation for TEC's return to the SCSC asking for a writ of mandamus ordering Dickson to implement the SCSC decision. By holding a hearing yesterday and making no decision, he forestalled any TEC return to SCSC, at least for now. A return would have been embarrassing to the judge, even if the high court had refused.

The secondary winner yesterday was ADSC lawyer Alan Runyan. His apparent strategy is deny and delay while his tactic is obfuscation. You have to hand it to him; these are working in Dickson's court. Yesterday Runyan succeeded in getting the judge to approach the case on his (Runyan's) own terms. The judge appears to be in agreement with him that the SCSC decision is neither clear nor definitive and the property issue is open to different interpretations. Considering that Dickson holds a Remittitur of a final state supreme court decision, this is quite an achievement for Runyan if you think about it.

Bottom line---the judge is allowing the SCSC decision favoring TEC to move toward death by neglect. He has failed to implement the SCSC majority decisions favoring the Episcopal Church. Yesterday's hearing gave us no convincing reason to think this trajectory will change.

The judge keeps saying he needs clarity. I do not understand what he means. The three orders on the last page of the SCSC decision are perfectly clear. Curious that Dickson found the first one clear but not the second and third: 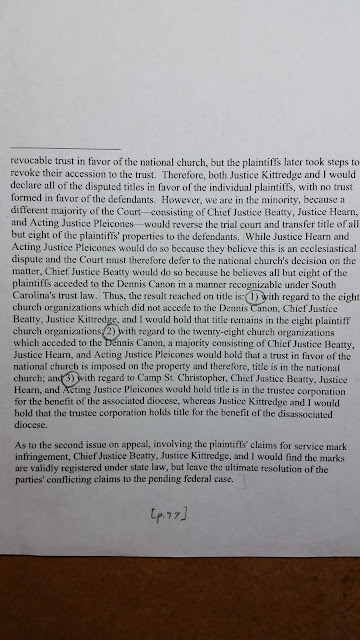 What is clear is that he has not implemented the SCSC decision and shows no sign of doing so now. That is my takeaway from yesterday. After two years of death by attrition, it may be time for the Episcopal side to reassess its strategy and tactics.
Posted by Ronald Caldwell at 1:22 PM