Separation of church and state is a bedrock principle of the American constitutional system. Since I am not an officer of any religious institution, I get to talk about politics in public without violating that principle. This blog posting is about politics. My usual disclaimer---what I offer here is only opinion.

How should Christians approach the voting booth? How should we go about choosing for whom to vote? Can sincere Christians choose different, even opposing, candidates in good faith? These are all good questions we ought to contemplate as we prepare to exercise our constitutional responsibilities of voting in the near future. I think our guide should be the two great commandments, love God and love neighbor. We should use this guideline to assess the candidates and make our choices. This is our responsibility as Christians. The problem with this is the difficulty of discerning which candidates best align with love of God and neighbor.

In an ordinary year it would be easy to use our moral idealism to choose our candidates, but this is no ordinary year. We have a president who, in my opinion, must be defeated. He must be denied a second term. Trump is not one to play by the ordinary rules, quite the opposite. He practices the politics of personal destruction. He cannot be defeated necessarily by simple idealism. Therefore, we must broaden our scope and combine practicality and idealism. As all Democrats keep saying, we must find the candidate best positioned overall to defeat Trump. I am old enough to remember that in 1972 Democrats went for pure idealism with McGovern and went down to a crushing defeat on practicality. We must not let that happen this year.

In November, we Americans will be called upon to choose a president, for most, the Republican or the Democratic candidate. We know with certainty the Republican candidate will be Donald Trump. As the incumbent, he arrives with great institutional strength. He also has a passionately devoted fan base of about forty percent of the nation. Here in the south, he is a cult figure who evokes strong emotions of support really surpassing the usual politician. That is the point, Trump is not a usual politician. He is something else. 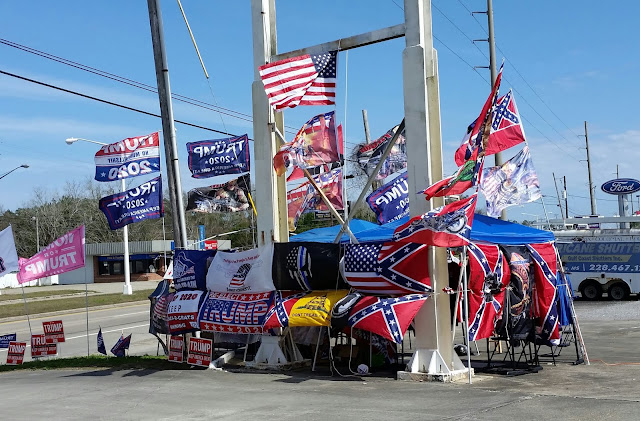 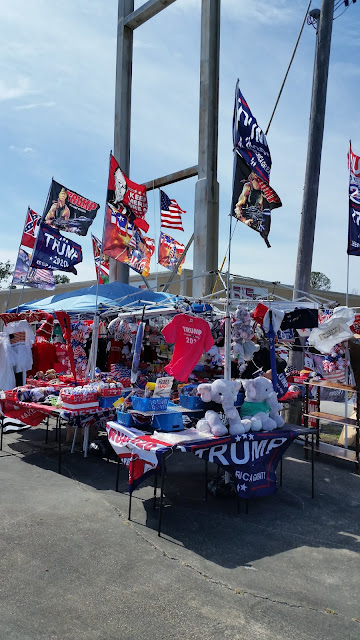 (9 Feb. A traveling vendor sets up shop along a busy highway in Bay St. Louis MS in the middle of Mardi Gras season. He reported business as good. In white neighborhoods of the area, there were often two objects in the front yard, a Wal-Mart statue of the Blessed Virgin Mary (this is French Catholic country) and a Trump sign. The popular feeling for Trump is best exemplified by the flag here that shows the president as Rambo. The attachment to Trump would be similar across the lower south, from South Carolina to Arkansas where the president is wildly popular with white people.)

Primary voting arrives soon. South Carolina will hold its primary on Saturday, 29 February. Nevada holds its caucuses on 22 February. On March 3, there is a mega primary in:  Alabama, Arkansas, California, Colorado, Maine, Massachusetts, Minnesota, North Carolina, Oklahoma, Tennessee, Texas, Utah, Vermont, and Virginia. By then, the Democratic frontrunner(s) should be well-defined.

On the Democratic party side, there is no clear leader at this time. Instead, there is a clump of viable candidates. For Democrats, this presents something of a dilemma as each brings strengths and weaknesses to the field. Here is my take on them:

BIDEN.
PRO---We have to love Joe Biden, vice president under Barack Obama and long-time actor on the national political stage with a great resume of work on progressive causes. Overall considered a moderate, he has by far the best credentials on experience.
CON---Cannot beat Trump. The right-wing noise machine led by Fox News will cover Hunter Biden and Burisma 24/7 until election day. Joe cannot overcome this. Moreover, he lacks the fire to go head to head with Trump.

BUTTIGIEG.
PRO---The brightest light among the candidates. Well-educated, well-informed, articulate, moderate in views, and energetic. Will rally young people. Will match Trump on the stage and best him intellectually.
CON---The homosexuality issue is there even if it cannot be quantified. Is the country ready to elect the first openly gay president? My biggest concern about him is not sexuality, it is lack of experience. He has only been the mayor of a medium-sized city.

SANDERS.
PRO---The best Christian in the race is not a Christian. So what? No one rivals Sanders in passionate devotion to improving the lives of people who need help the most. Energizes young voters. I love him as he is a person after my own heart, a man of radical love and vision.
CON---Unelectable. Trumpists and right-wing media will label him a Communist. He will be on defensive the whole campaign as a self-avowed democratic socialist. Middle of the road voters will be frightened away from voting for him.

WARREN.
PRO---Strong progressive credentials make her a replacement choice for Sanders. Smart, well-prepared, and relentless, she will outshine Trump on the debate stage. He will not be able to bully her into submission.
CON---Not fair to her, but there is a lot of reticence to nominate another woman after Hillary's failure. Moreover, right-wing media will bombard her daily as a radical liberal set to bankrupt the country. Uncertain as to whether she can fight back successfully in view of her slide in the polls in recent weeks.

KLOBUCHAR.
PRO---The down-to-earth, sensible, moderate, problem solver from the heart of America. She also shows a toughness of purpose, as in the Kavanaugh hearings. Good experience. Has shown strength in the Democratic debates.
CON---Same question as for Warren. Has not quite caught on with voters, at least in Iowa and New Hampshire. Trailing several front-runners. Lack of public support may signal electoral weakness ahead.

BLOOMBERG.
PRO---All the money in the world to beat Trump. Has already started a massive media campaign that is effective in attacking Trump. Experience as the tough big city mayor.
CON---There is something a bit off-putting about a fabulously rich man buying his way into power. There has to be more than money. We have not yet seen exactly what he proposes to do for the country. Maybe this will become clearer soon.

I think the rest of the Democratic candidates are not viable.

So, as you can see, I have not decided for whom to vote in my Democratic primary on March 3. The one thing that every Democrat agrees on is to choose the best candidate to beat Trump. The problem is, who is that? I have ruled out Biden and Sanders are unelectable, for different reasons. This leaves Warren, Buttigieg, Klobuchar and Bloomberg. I doubt seriously that Warren and Buttigieg can get elected, again for different reasons. This would leave Klobuchar and Bloomberg. For me, Klobuchar is going to have to show some strength among voters and Bloomberg is going to have to show some policy agenda.

Right now, the bookies in Vegas are betting on Sanders to win the Democratic nomination. If they are right, we can prepare for a Trump second term.

As everyone's, my extended family and friends include Trump fans. My unscientific survey finds two groups, one that will vote for Trump regardless. They are die-hard Trumpists. He can do no wrong. But there are others who like Trump's policies but dislike his personality. They are offended by his profanity, vulgarity, mendacity, cruelty, and, in general, lack of decency. Given the right circumstances, some of these people could be persuaded to vote for the Democrat, as the Republican voters of Alabama did to prevent the Republican candidate, Roy Moore, from winning a Senate seat. Decent people draw a line somewhere. So, as a Democrat, I am not giving up on my fellow Americans, people to whom decency still counts. I believe as a nation we are devoted to the principles of our democratic republic, principles that are being trampled by President Trump.

There are two factors to consider with President Trump. In the first, he has solidified the conservatives in a backlash against the democratic reforms of post-Second World War America. Trump's new proposed budget shows this clearly. The financial powers, the angry white working class man, southern whites, and evangelical Christians are all passionately devoted to Trump. In the second factor, he is trying to create an all-powerful executive. This would concentrate governmental power in the president by reducing the Congress and the courts to secondary status. The conservative block behind him is helping him to do this. The recent vote in the Senate on impeachment showed the effect of this alliance very clearly. Helped on by his myopic train, Trump is well on the road to building an authoritarian state. His reelection in November would greatly boost this. In my opinion, this would be a disaster for our constitutional system of government. Trump would consolidate the imperial presidency. The U.S. would in effect turn from the Roman Republic to the Roman Empire and Trump would be its first Caesar Augustus. Democracy as we have known it would die away. Therefore, this year's election is the most important in our lifetime.

Let us approach the impending primaries with the utmost of careful consideration and with fervent prayers.
Posted by Ronald Caldwell at 11:23 AM