Welcome, blog reader. It is Thursday, June 10, 2021 and time to check in on the crises we have been tracking for a long time. There really is not much new to report, so this is just a reminder that I am here and keeping an eye on the matters at hand.

PANDEMIC. Signs show improving data in most countries, as America. New cases, hospitalizations, and deaths have declined steadily since the winter surge. Vaccinations are continuing although they have slowed a bit. As of June 8, 42.3% of all Americans are fully vaccinated while more than half had had one shot. Sadly, our southern states are bringing up the rear, as usual. Of the 50 states and D.C., South Carolina is #40, at 35.16% vaccinated. Not surprisingly, Alabama is #50 at 29.48%, and Mississippi is dead last, at 27.95%. In most places, restrictions have been removed or lessened. Many people are out and about now as summer arrives.

SCHISM IN SC. Crickets. As usual, still waiting on the courts to act, this time the SC Supreme Court. Sooner or later, and it looks like later, the SCSC will have to render a judgment. The Episcopal diocese is appealing Judge Dickson's decision of 2020 that rejected the SCSC decision of 2017 and awarded all to the breakaway faction. The SCSC has two choices: uphold its 2017 decision and reject Dickson, or, affirm Dickson and reject its 2017 decision. Common sense dictates the former, but no one should jump to the conclusion that this will be the outcome.

THE ADVENT. After the dramatic events in May, the Episcopal Cathedral Church of the Advent, in Birmingham, is in the process of finding its way to a new order and stability. The last time I checked, the Rev. Zac Hicks was still on the payroll. He is the canon for worship who, last month, declared publicly the Episcopal Prayer Book to be anti-Christ (specifically the gap in the Rite I communion liturgy). I watched the two morning services on YouTube last Sunday. There were more traditional Episcopal worship forms in both. However, the "praise band" (what I call the hootenanny band) was still making noise in the early service. The Chancel Lamp was still out, meaning there was no reserve sacrament in the Ambry. I may have missed it, but I did not see an Episcopal Church flag although the U.S. flag was clearly visible.

The vestry and the bishop have been busy working on a "Covenant" to settle tensions between the parish and the diocese. I do not want to say more about this now just to say I believe it likely the Covenant to be finished soon and released to the public. I will post it when I receive it. I think most people will be pleased with the settlement.

POLITICAL CRISIS. After last fall's election, I thought the political situation in the U.S. had calmed down. Not so. It has worsened. There is a giant clash between pro-democratic revolutionary forces and anti-democratic forces. Unfortunately, the two big parties have become polarized around this. This has become critical for the continuation of the United States as a democratic society. The forces of one party tried to overthrow the government last January 6 and since then have denied and protected this attempted coup. That party has turned against the principles of democracy. Democracy rests on two great principles: equal rights for all people, and majority rule. One party is now defending these and the other party is struggling to build a political system in defiance of them. This is the most serious political crisis in America since the Civil War. The upcoming elections, in 2022 and 2024 will be a test of wills between the pro and anti democratic forces in America.

Finally, my usual sign-off: no one asked for all of this. We did not have a choice. These crises were given to us for the time of our lives. We also have a mission, to be God's people in the world and we must treat these crises in terms of our mission. Peace.

If anyone is wondering what is going on with my garden these days, I will offer a few photos made this week. We had a warm winter and have had copious amounts of rain since then. The result is a lush garden, weeds and all (a garden that will not grow good weeds is not much of a garden). 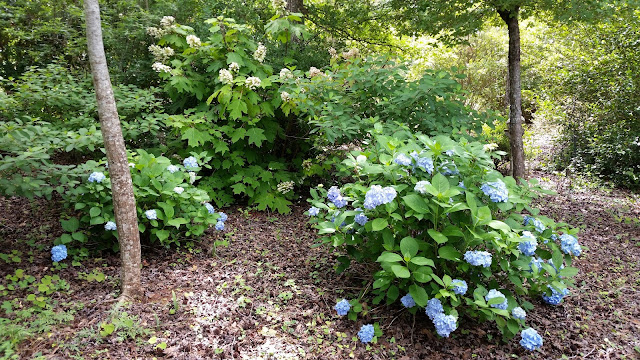 Most hydrangeas are coming out into full bloom now. Here, Nikko Blue stands before Oak Leaf. There are several kinds of hydrangeas in this shady area. They expect lots of water. 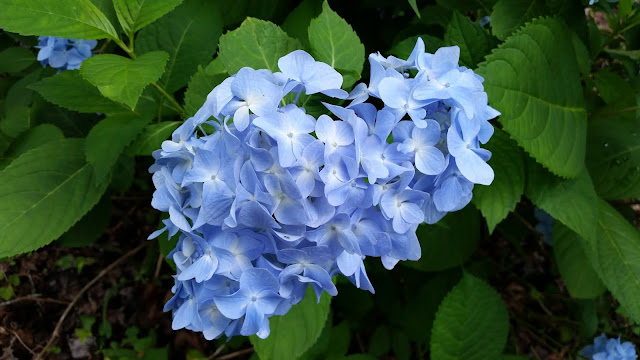 Nikko Blue is popular in southern yards and gardens and for good reason. In fact, hydrangeas are native to the south. At this time of the year, Oak Leaf hydrangeas, with their long white flower spikes, can be seen growing in abundance in the natural woodlands of Alabama. 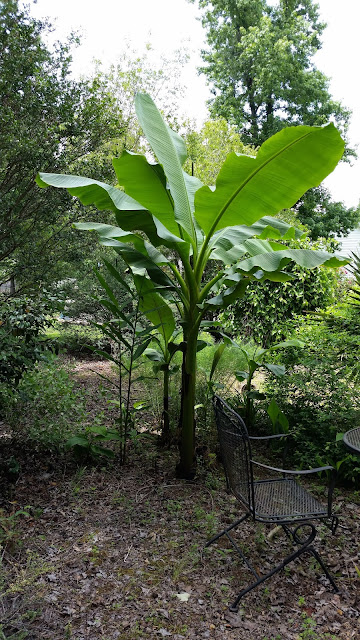 Being a native Floridian, I am fond of tropical plants. No plants love lots of rain more than banana trees, and they show it in their exuberance. The ginger to the left will provide aroma to this seating area in the fall. 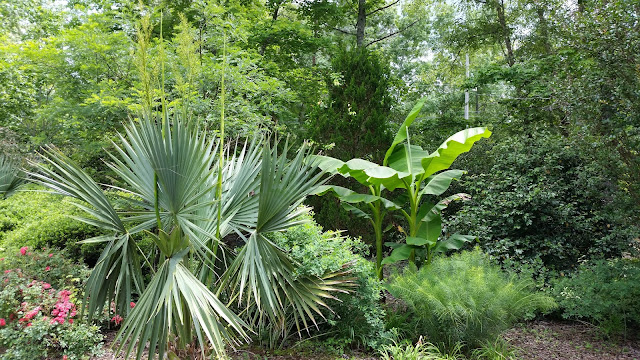 Looking from the other side, one sees Sabal minor (Louisiana palmetto) and perennials. The seating area is hidden behind these. 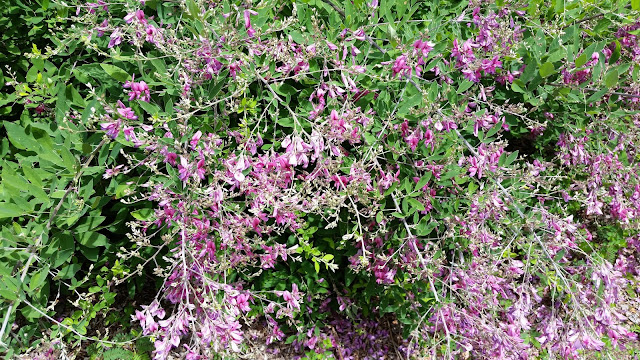 Japanese Pea Shrub (Lespedeza thurnbergii) is an excellent and much under-used deciduous bush for a sunny spot. This one is full grown at six feet across. 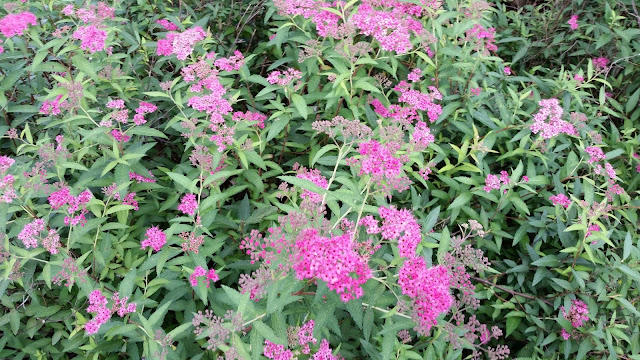 Spiraea is one of the best families of shrubs for the garden. I have numerous examples. A common form is Anthony Waterer Spiraea. It makes a small bush and can be tucked into a sunny spot to add color. 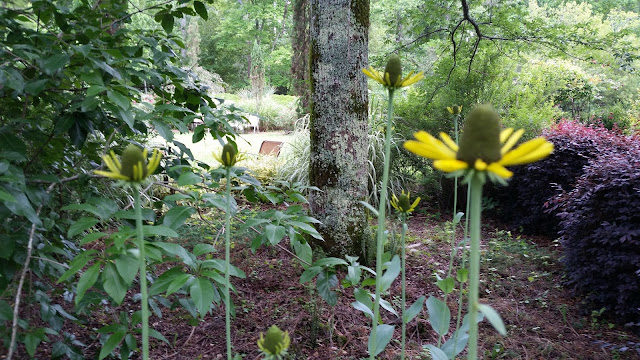 For a conversation plant, try this one, Giant Cone Flower (Rudbeckia maxima). It grows six feet tall and puts out these large "cones" of seeds. Likes sun but tolerates some shade. Birds greatly enjoy the seeds. I am sure I have the happiest birds in the county. I give them plenty of natural food, water, and nesting places, and they reward me with their beauty and song. It's a win-win.

Posted by Ronald Caldwell at 10:53 AM