SC SUPREME COURT HAS NOT GRANTED A REHEARING

On yesterday, I posted here a note that there was a report that the South Carolina Supreme Court had granted a rehearing to seven of the eight petitions before the court (actually the report did not use the word "rehearing" but used the word "reconsideration" which, while technically true, could also be misleading in context; "granted the petition" was not true since the petition was for a rehearing). In fact, we have learned this morning the SCSC has not agreed to any petition for rehearing.

This morning, the SCSC posted its undated [June 7?] Order giving its decision concerning the petitions for rehearing. Here is the Order. Click on image for enlargement. 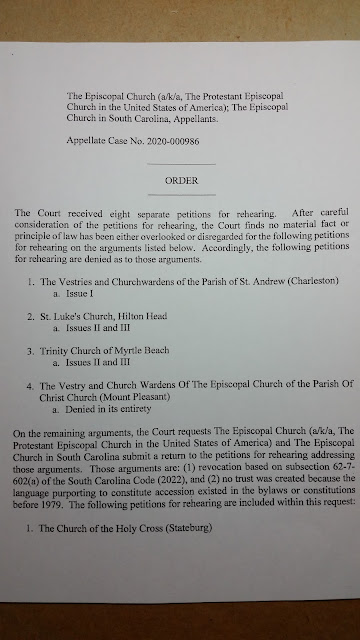 Here are the salient points:

---Christ Church, of Mt. Pleasant, was "Denied in its entirety." This means the SCSC has completely rejected Christ Church's request.

---The Episcopal Church side has until June 20, 2022 to file its counter-argument to the court.

Thus, we now know the South Carolina Supreme Court has not agreed to a rehearing of any of the eight petitioners. What it has done is to leave open consideration of some of their arguments and to ask the Church side to present a counter-argument to the claims of the petitioners.

Unfortunately, the court lists "Issues, I, II, and III" without identifying these issues. The eight petitions to the SCSC are not the same and do not follow the same arguments. I, for one, am unclear on what Issues I, II, and III are.

Now, we have to wait on the paper the Church lawyers will submit by June 20. Then, as far as I can see, the SC Supreme Court will decide whether to 1-hold a rehearing or 2-refuse a rehearing, or 3-revise the "Revised Opinion" of April 20, 2022 without a rehearing. Basically, the SCSC has to decide whether to keep the decisions they made in the April 20 opinion or change them.

The people who think we have finality and closure might reconsider their view.

Posted by Ronald Caldwell at 8:07 AM