Greetings to you, blog reader. It is May 3, 2020. Today is Good Shepherd Sunday, the fourth Sunday in the Easter season. The Gospel reading today is of the Good Shepherd. The Psalm of the day is the Twenty-Third, surely everyone's favorite.

So, let's take a break from the darkness of the COVID-19 plague ravaging our world and remember the Lord as the Good Shepherd, the one who rescues even the least among us, the lost lambs. If we ever needed the reassurance of divine love and care, it is now in this time of crisis. Taking a moment out to reflect on this thought will do us good.

A long time ago, some forty-odd years now, I had a sudden medical emergency. As I lay in the twilight zone between life and death for several days my foggy mind could recall only two Bible passages I had memorized years before, the Lord's Prayer and the Twenty-Third Psalm. I came to rely on them in my moment of need, repeating them over and over. They got me through and eventually I recovered well thanks to the God-given miracles of modern medicine. All these years later, I am still partial to these two. They still help me through tough times.

My favorite musical rendition of the Twenty-Third Psalm is the theme from "The Vicar of Dibley," one of my favorite shows. It is worth hearing again today. Find it here . 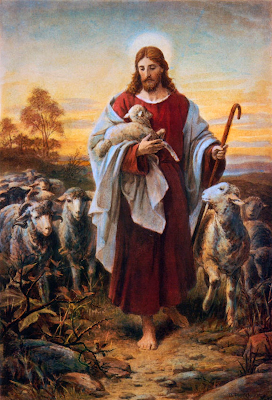 This painting, reproduced many times, became a favorite of stained glass makers. Around the year 1910, the window below was installed in St. Luke's Episcopal Church, in Jacksonville, Alabama. The name of the company that made it has been lost in time. It is Plockhorst's painting minus the flock of sheep:

So, let us take a moment today and remember the Good Shepherd. No one wanted the crisis we are in. No one caused it. But, here we are for the living of this hour. And, as the Good Shepherd, we must do our best to care for each other and for ourselves.

The Collect of the Day:

Oh God, whose Son Jesus is the good shepherd of your people; Grant that when we hear his voice we may know him who calls us each by name; and follow where he leads; who, with you and the Holy Spirit, lives and reigns, one God, for ever and ever. Amen.

Posted by Ronald Caldwell at 6:27 AM