TODAY IS THE DAY

It is Thursday, 26 September. At long last, the day has arrived, the day for mediation to begin.

The meeting is to be guided by attorney Thomas J. Wills, in Charleston. Find Wills's website here . Wills is well-known as an expert in mediation. He certainly has his work cut out for him. Everyone can only wish him well. Bear in mind that, in mediation, any agreement is voluntary on both sides. Mediation is not a forced arbitration. The two sides will have to reach mutually agreeable terms in order to finalize a written settlement. Considering everything, this will be a monumental task.

As far as I know, the chancellors of the two dioceses will be present and probably accompanied by assisting lawyers. They are well-known and highly regarded lawyers themselves:  Thomas S. Tisdale for the Episcopal diocese and Alan Runyan for the Anglican side. No one knows the history of the litigation better than these two. They have been there from the very beginning. They are tough, battle-scarred veterans of this long and hard war.

The mediation will be private and confidential. The public will be informed either after a mutual agreement is signed, or the mediation fails. The lawyers will not be allowed to talk about what went on in the meetings otherwise. So, do not expect to know anything today.

The last round of mediation did not go well to say the least. There were three meetings from October of 2017 to January of 2018. Each one was very brief. The only issue revealed to the public was Bishop Adams's request to meet with each of the 29 parishes to be returned to the Episcopal diocese. The Lawrence side refused. End of mediation. Under confidentiality, we cannot know if the sides discussed anything else, but there is no evidence of any other discussion. The last round of mediation accomplished absolutely nothing.

Under the privacy rule, we are likely to know nothing new at the end of the day. However, we may know if a new date has been set for a second meeting of the mediation. If a second day is announced, that would likely be a positive sign. If no new date is announced, we may fear the worst.

The best outcome would be a settlement across the board. The worst would be a complete breakdown and return to the camps on the smoldering battlefield. Everyone living and breathing longs for the former (except possibly the lawyers). Everyone is exhausted and past ready for peace. Nearly seven years of legal warfare have taken an awful toll on the thousands of people on both sides. It is time for this scandal to cease.

So, hold in mind your thoughts and prayers that a presence greater than everyone may descend onto Broad Street today and soften hardened hearts and bring clarity of human reason to do the right thing. Both bishops have called for prayers. Bishop Lawrence may be found here . Bishop Adams here . I will go out into my garden, now in its autumnal beauty, and say a little prayer. I suggest you find your favorite spot and do the same.

I will post news on this blog as I receive it. Peace. 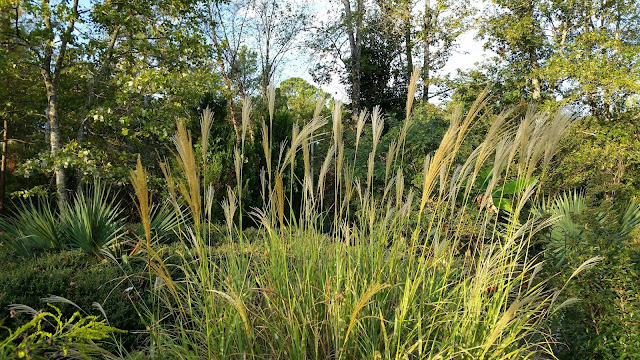 This morning's sunrise illuminates Zebra Grass (Miscanthus sinensis 'Zebrinsus') in my garden. Ornamental grasses are in their glory at this time of the year.

Posted by Ronald Caldwell at 6:46 AM