At long last, the Anglican Church in North America has discovered human rights, or at least it says it has. On May 29, 2020, its archbishop, Foley Beach, published a letter penned by ACNA bishops Jim Hobby, Todd Hunter, Stewart Ruch and Steve Wood. Find the letter here . The letter condemns the killing of George Floyd. We should all rejoice that the ACNA is apparently turning in the right direction. It has a long way to go; and so we should cheer them on as they move forward on their journey championing human rights.

In fact, the Anglican Church in North America was created in 2009 by a coalition of anti-homosexual rights American Episcopal clergy and GAFCON, the equatorial African based union of anti-homosexual rights Anglican bishops. The main impetus in the creation of the ACNA was to stand against equal rights for and inclusion of open homosexuals in the life of the church. They threw in women to boot. In ACNA, women are not allowed to be bishops. They are to remain submissive to male authority. (In fact, Bishop Iker of Ft. Worth declares he is not in communion with other ACNA bishops who ordain women to the priesthood.) Moreover, the ACNA condemns transgender. So there you have three elements that ACNA openly discriminates against. So, ACNA has a lot of work to do as it goes down the road of its newly stated principles.

In the letter the ACNA bishops declared:

"So God created man in his own image, in the image of God he created him; male and female he created them. (Gen 1:27)
What happened to George is an affront to God because George's status as an image bearer was not respected. He was treated in a way that denied his basic humanity."

Amen. So, bishops of ACNA it is time for you to start respecting the other "image bearers" of God whom you have diminished by your own pharasitical discrimination: homosexuals, women, and the transgendered. They were made in the image of God just as much as you and George Floyd were. Yet, you have not treated them in a way that respects their basic humanity.

The ACNA has taken a commendable first step in recognizing the inherent rights of all of God's creation. Now let's see how the ACNA bishops apply their newly discovered principle to the children of God whom they have not respected. We are waiting. 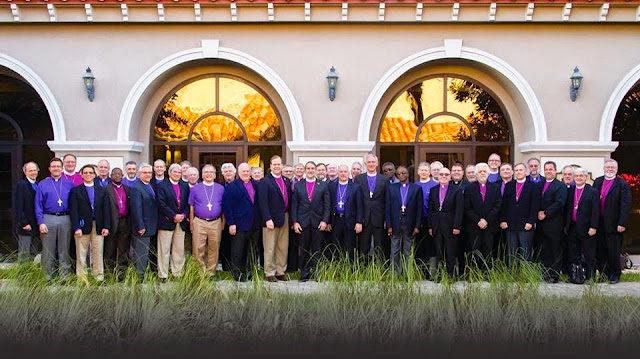 Recent assembly of the bishops of ACNA. Of the 41 present, how many people "of color" do you see? I count three (7%). The rest are old white guys. Now that their consciousness of human rights has been awakened, these guys have an awful lot of work to do. Go guys, we are rooting for you.
(Can you find Mark Lawrence? I think he is the tenth from the left.)
Posted by Ronald Caldwell at 10:21 AM