In a stunning turn of events today, Circuit Judge Edgar Dickson issued an "Opinion" on the church case nullifying the South Carolina Supreme Court decision of August 2, 2017. This is not surprising but it is shocking that a low level state judge would assume the authority to overrule the state Supreme Court. Dickson's outrageous decision cries out for appeal, and it will certainly be appealed to the South Carolina Court of Appeals.


First a brief summary of the background.

On August 2, 2017, the South Carolina Supreme Court issued an opinion on the church case that had been appealed to it from the circuit court which had ruled in favor of the disassociated contingent. On the last page, the justice overseeing the case, Jean Toal, summarized the three majority decisions of the Court (click image for enlargement): 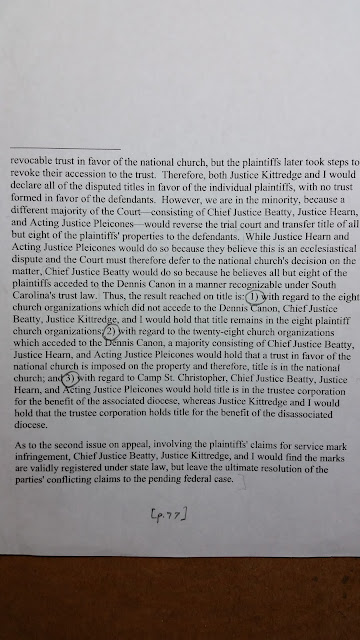 The SCSC denied a rehearing and sent a Remittitur to the circuit court on Nov. 19, 2017. A Remittitur is an order to implement a court decision. The Anglican diocese applied for cert with the U.S. Supreme Court which denied it.

Judge Dickson was assigned the case in January of 2018, nearly two and a half years ago. He held four hearings and collected several dozen papers from both sides. The Episcopal diocese tried twice to get the state supreme court to intervene and prod Dickson on to implement the SCSC decision but the court refused.

Meanwhile, last September, a United States District Judge in Charleston, Richard Gergel, ruled that the Episcopal Church is hierarchical and that the church diocese is the only legal heir of the pre-schism diocese. He placed a permanent injunction on the new diocese from making any claim to being the historic diocese. Gergel's decision is now on appeal.

This is a 46-page sweeping denial of the state supreme court majority decisions but it lacks little to no substantial backing.

In the first place, Dickson declares the church dispute to be theological. On page 3, he wrote:

On January 3, 2013, the Diocese, the Trustees, and the individual church parishes organized as South Carolina non-profit corporations filed this action against TEC and TECSC to determine the ownership of church property due to disagreements on the theological direction of the Episcopal Church.

That should have stopped him right there because the federal court has declared the Episcopal Church to be hierarchical. That means the church alone has the right to govern its dioceses.

Then, Dickson went on, on page 5, to declare the duty of the circuit court to "enforce" the state supreme court decision. He immediately proceeds to do just the opposite.

Dickson said he had the right to discern the "intent" of the SCSC justices even though they had explicitly listed their majority decisions. He zeroed in on Chief Justice Beatty's opinion:

In fact, Chief Justice Beatty explicitly joined with the majority that the 28 parishes acceded to the Dennis Canon. Beatty wrote on pages 37 and 38 of the Aug. 2, 2017 decision:

I agree with the majority as to the disposition of the remaining [28] parishes because their express accession to the Dennis Canon was sufficient to create an irrevocable trust.

The majority of justices of the SCSC clearly and explicitly ruled that the 28 parishes had acceded to the Dennis Canon. Yet, Judge Dickson purports to nullify this, as he wrote on page 23:

Thus, Judge Dickson directly contradiced the majority of the SCSC justices. Three of the five SCSC justices said that 28 parishes acceded to the Dennis Canon. Dickson said they did not. Therefore, the second order on page 77 of the SCSC decision was invalid. This sounds as if Dickson said the intent of the justices was not the same as the final decision of the judges, and we have to follow the intention rather than the conclusion.

Dickson went on to rule that the Episcopal Church and its diocese were not the owners of the parishes in question and the camp. This contradicts majority decisions number two and three on page 77 of the SCSC decision.

Judge Dickson was given a Remittitur to implement the SCSC decision. He has not done that. Instead, he has re-litigated the issues in the case on his own and has reversed the SCSC decision in favor of the disassociated association. He took it upon himself to say the SCSC decision does not mean what it says.


As I understand the judicial system, a supreme court is just that "supreme." It's word is final. The state supreme court closed the case and sent an order to the lower court to implement the decision. I do not see what right a circuit court judge has to change the majority decisions made by the state supreme court. He was tasked with implementing the decision, not to retry the case. If the SCSC had wanted that, it would have issued a Remand order to the circuit court.

If I read this Order right, Dickson seems to be saying the process of making the decision is more important than the final decision. He cites five different opinions. In fact, there were five separate opinions, but they were not all different. There was a majority on the three key issues. Besides, the only thing that counts in any supreme court decision is the conclusion. How the justices arrived at their conclusions is irrelevant to the law. Only the final, majority opinion counts. How the justices got there may be interesting, but it does not matter in the final analysis.

I cannot speak for the church lawyers, but I am confident they will appeal Dickson's outrageous decision to the South Carolina Court of Appeals. I cannot imagine any scenario in which the appeals court would agree with Dickson to nullify the SCSC decision. Surely, they will defend the judicial system if nothing else. If the Appeals Court rules for the Episcopal Church, which I believe they would, I suppose the breakaways could appeal that to the South Carolina Supreme Court. Since the SCSC has already ruled definitively on this case, I do not see how they could rehear it. They have already denied a rehearing.

In conclusion, Dickson's ruling today was not surprising but it was still shocking in its defiance of the state supreme court decision. I am confident it will not stand. In the end, the Episcopal Church will recover its properties but by then the hard feelings from the breakaways will be harder than ever and any thought of reconciliation will be a far-off dream if possible at all. The tragedy of today is the prolongation of the division and hostility between two sets of former friends.

People of the Episcopal Church should not give up on this. In fact, both the SC Supreme Court and the federal court have ruled in favor of the Church. Dickson's strange diversion of today is only an abberation. I am confident it will not stand. Odds are strong the SC appeals court will uphold the state supreme court decision.

In my view, justice was not served today. It will be tomorrow.

Find the news release from the Episcopal diocese here .


[NOTE, my usual disclaimer. I am not a lawyer or legal expert. The above is only opinion. I am not an officer in any religious institution.]
Posted by Ronald Caldwell at 3:22 PM