FEAR AND LOATHING
IN THE DSC PARISHES
(2nd edition, Aug. 20)

The 29 DSC parishes that the South Carolina Supreme Court declared under trust control of the Episcopal Church are preparing for the inevitable and they are doing it with fear and loathing. Today, Church of the Resurrection, in Surfside, held a "Community Gathering" to spread the word in their parish about the situation at hand. Here is the handout of the day:

(Left click on the image to get a larger picture) 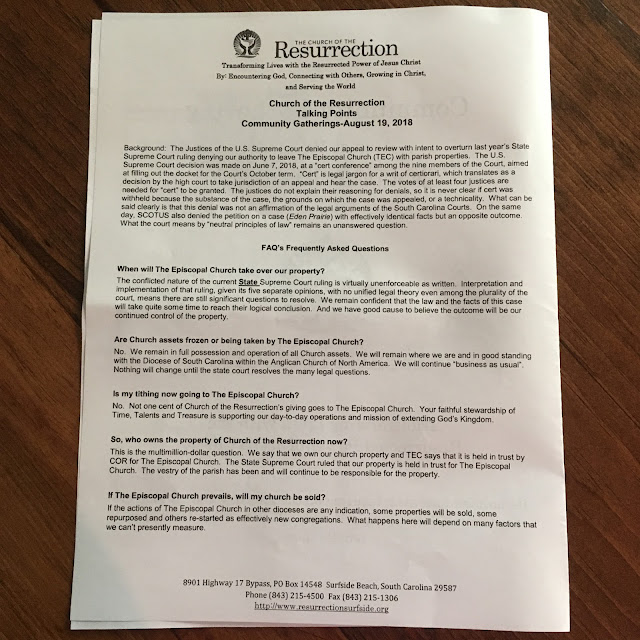 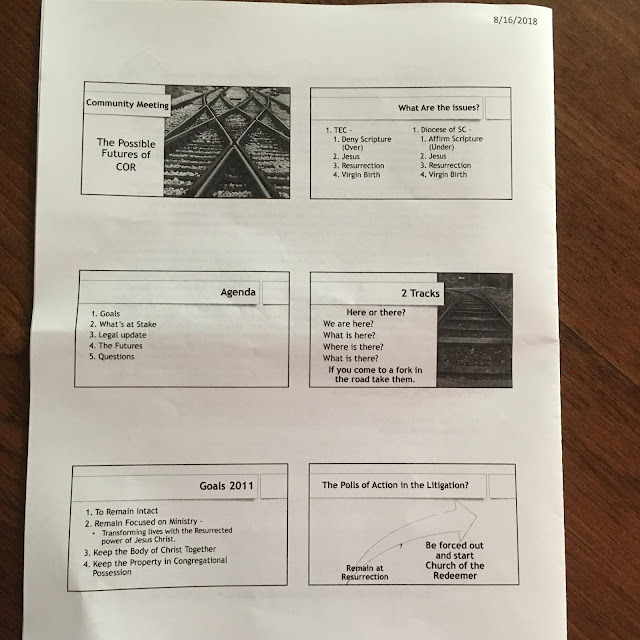 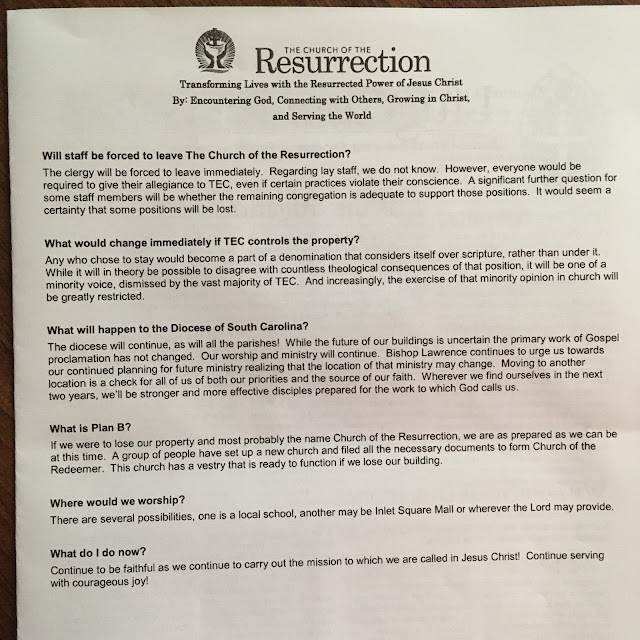 Although I cannot say for sure, I expect Resurrection's response, preparation, and public relations initiative is probably typical of the parishes, certainly of most of the ones with which I am familiar.

There is so much to unpack here, I hardly know where to start, so I will begin by saying this handout makes me profoundly sad. These pages are loaded with misinformation but overall have a tone of fear of what is happening and loathing of their "enemy," the Episcopal Church. Fear and loathing are not what Christianity is supposed to be about. Yet, this is where we are in old diocese of South Carolina.

Let's look at the pages one at a time.

This continues the main talking points that the diocese has been following for months. It is a contradictory message: will not lose properties v. prepare to leave.

Look at the last sentence of the first answer:  "And we have good cause to believe the outcome will be our continued control of the property."

Now, go down to the fourth answer and we find this:  "The State Supreme Court ruled that our property is held in trust for The Episcopal Church."

This two statements are directly contradictory. I think this is deliberate and for reasons I have given in earlier posts. Will not lose property=keep paying lawyers; Will lose property=prepare to leave and form church in exile.

Now look at the last question. At least they did not predict TEC would sell the place to Muslims.

This is obviously meant to keep the church family together and with a giant arrow "Be forced out and start Church of the Redeemer." TEC is demonized as being against the Bible, the uniqueness of Jesus Christ, the Resurrection, and the Virgin Birth. DSC is shown as the right side of these issues. Alas. This is too much.

Note to DSC faithful:   If your clergy are telling you the Episcopal Church no longer believes in the Bible, in the uniqueness of Jesus Christ as the Savior, in the Virgin Birth, and in the Resurrection, they are not telling you the truth. The truth of the matter is the Episcopal Church has not changed its beliefs. Episcopalians recite the Nicene Creed regularly just as you do. What it has changed is its social policies. TEC requires everyone to respect the equal rights of homosexual and transgendered people. If you do not want to treat these people as you treat everyone else, then you should stay with DSC. How we treat others is the real difference between TEC and DSC, not the beliefs of the religion. TEC stands for human rights for all people. DSC stands for discrimination against women, gays, and transgendered.

Conclusion is to combine fear and loathing, keep the bulk of the congregation together and leave to continue as an anti-TEC church elsewhere.

"The clergy will be forced to leave immediately." In fact, each DSC clergy person has a choice of applying for reinstatement in the Episcopal Church and functioning in the parishes or leaving the parish. This is a choice the clergy will make voluntarily. If the clergy person refuses to apply for reinstatement in TEC then, yes, he or she will have to leave because only TEC clergy in good standing in the Church diocese may officiate in TEC churches.

Now look at the third question. "Moving to another location is a check for all of us of both our priorities and the source of our faith." Talk about a guilt trip! If you do not move with us, you have a problem with your priorities and your faith! Pulling out all the stops.

Then comes the news that the parish leaders have already prepared for the move. "A group of people have set up a new church and filed all the necessary documents to form Church of the Redeemer. This church has a vestry that is ready to function if we lose our building." But wait, you said on Page 1 you would continue to control the property for the foreseeable future. (Oh well, consistency is not the strong point of the schism.)

As time goes by, I expect we will see more and more of this sort of DSC frantic activity to pull as many people as possible out of the returning parishes in order to form DSC congregations and keep the Lawrence diocese going. Unfortunately for everyone involved, there is much more to come before the merciful end of it all. The end cannot come soon enough.

The rector of Church of the Resurrection, Surfside Beach, has declared an "extreme financial deficit" in the parish. As a historian, I appreciate the Rev. Ron Greiser as he is right up front with the details. He does not try to hide things or mince words, as opposed to so much of the secrecy in DSC. I wish the other rectors in DSC would follow his example. Greiser put this in his August 19 bulletin insert (find it here ):

As most of you are aware, we as the Church of the Resurrection are in an extreme financial deficit. The Finance Team and I have been evaluating how we are to address this issue and we developed several different scenarios that would address our financial situation. Each of the scenarios addressed staffing, loss of staff and or percentages of reduction in pay to reduce the deficit. These scenarios included no longer paying our diocesan pledge as well as our legal fees for the rest of the year as well as cutting many of our expenditures in line items. I have contacted Bishop Lawrence to appraise him of the situation regarding our pledge and legal fees and his response was gracious. He also indicated that we are not the only church that is suffering deeply from the legal situation. Because staffing falls under the leadership of the Rector, I have met with all of the staff to let them know that effective immediately they will take a 10% reduction in pay. We will communicate as much of this as we can through the E-news as well as through our Community Gatherings that will be held on August 19th. Difficult times call for difficult decisions, but I need each of you to know that I am confident in our future. Please note that not having to pay for a youth minister for the remainder of the year has minimized deeper cuts that otherwise may have been necessary.---Fr. Ron Greiser.

What does this tell us about the state of the Church of the Resurrection?

5---All remaining staff compensation cut by 10% (does "they" include the rector?)

6---Stopping the money to the diocese and to the lawyers tells me that COR is dissatisfied with the direction of the diocese and the litigation. If they were really devoted to these, they would keep up the payments and divert the money from somewhere else in the budget. One can only wonder how many other DSC parishes have suspended payments to Coming Street and the high-priced attorneys. All of this makes one wonder about the actual unity within the independent diocese.

Farther down in the insert we get the details of COR's financial crisis:

Moreover, the parish holds a mortgage of $787,279. I am wondering if any payment has ever been made on the principle. Or, are they just paying the interest to pass this big debt on to the Episcopal parish of the near future?

Communicant numbers of COR reflect this crisis in the parish. In the official statistics of the diocese as offered in the annual journal, COR listed communicants as:

One of the three petitions of the Episcopal Church diocese now before Judge Edgar Dickson, of the circuit court, is a request for an accounting of all financial dealings of the Diocese of South Carolina since January 1, 2008. Judging from the state of affairs in the parish of Resurrection, Surfside, I would say this is absolutely necessary before the 29 parishes are returned to control of the Episcopal Church bishop. He will inherit a mess in Surfside. There is just no telling how many more Surfsides are out there among the other 28. It will take at least a top-notch accounting firm to sort through all this. Considering the deep hostility of DSC for TEC, I think it is safe to assume the Lawrence followers will do no favors for the Episcopal Church bishop in the returning parishes. Reports said that in his recent speaking tour, Bishop Lawrence became visibly agitated as he spoke about TEC's move for financial accounting.

Should not it be dawning on the clergy and communicants of Lawrence's diocese that their leadership led them into this void? They sued the Episcopal Church. They saddled the parishes with lawsuits. They caused double payments to lawyers, one to diocese, one to parish. And for what? Five years later, legal disaster. The 29 parishes are going back to the Episcopal Church. And some people still want to follow this kind of leadership? Is discrimination against homosexual and transgendered people worth all this? This is what the clergy and the 13,000 communicants of the 29 parishes ought to be asking themselves.

Posted by Ronald Caldwell at 3:17 PM