In my last blog entry, "Fact Checking Bishop Lawrence," 14 August, I mentioned that I was in possession of two documents on the Episcopal Church's June 2015 offer of a compromise settlement. I thought you readers might like to see the original documents themselves and not just take my word for them, and so I am presenting them here. If you left click on the image, you will get a readable enlargement. This was the best quality of image I could get on this blog.

The first is the letter of June 1, 2015, from Thomas S. Tisdale, the chancellor of the Episcopal Church in South Carolina, to Henry E. Grimball, attorney for St. Michael's church. (Tisdale and Grimball are quintessential Lowcountry gentlemen who trace their notable Carolina ancestry back a long way. I do not know this as a fact, but I expect it is safe to assume they are old friends who like to settle things as the gracious and good mannerly traditional South Carolinians they are.) 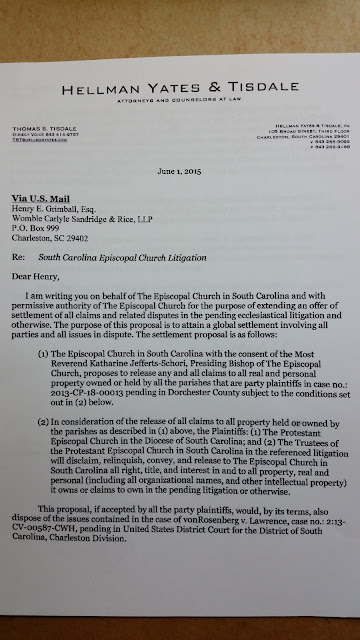 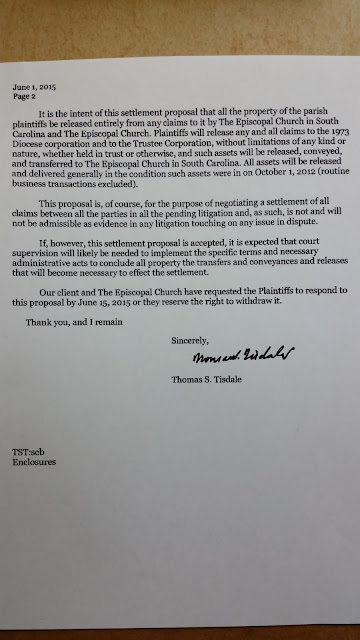 Read this letter carefully. It is plain and straightforward. It makes several major points:

-----It says directly it is under the authority of the national Episcopal Church.

-----This would end all litigation between the two parties.

-----This is a proposal to negotiate a settlement of all claims.

-----It projects court supervision of implementation of the settlement.

On June 3, Tisdale sent this letter to all of the attorneys of the DSC side. Alan Runyan, the lead lawyer for DSC, was one of those.

Since the letter had come from Tisdale alone and not the  national church, there seemed to be some question about whether the national church was really a part of this even though the letter plainly stated it was. To clear this up, two days later, on June 5, 2015, attorney Mary Kostel sent an email to all of the DSC attorneys assuring them the national Episcopal Church had agreed to the deal. Kostel, based in Washington D.C., was, and still is, one of the lead lawyers for the national Episcopal Church. She was one who represented TEC in the circuit court trial of July 2014. Here is her email: 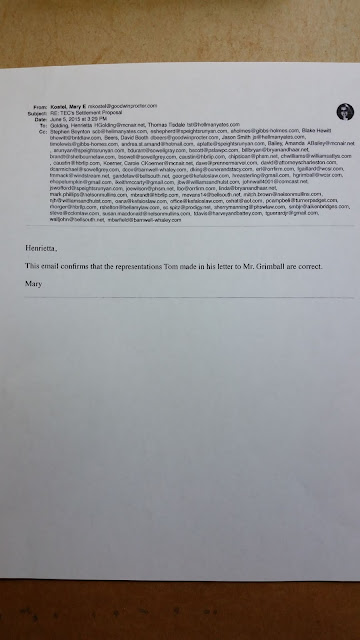 Apparently, DSC made no official response to Tisdale's letter, at least none of which I am aware, until June 15 when the DSC authorities posted a press release on the diocesan website furiously rejecting the offer and insulting the senders. Ever since, the DSC leaders have made a major point of attacking the offer.

Of course, if DSC had accepted the offer, the 36 parishes would now all be independent of the Episcopal Church and would own all of their properties without any trust control. DSC would be a viable diocese that could move forward into the future instead of the shriveled shadow of today. In addition, we all would have been spared the agony of the ongoing, destructive litigation. Their refusal of compromise is now a heavy burden the leaders of DSC own. They will bear forever the historic responsibility of refusing a golden opportunity to end the schism on good terms for themselves and their followers.

In its FAQs (find here ), DSC still maintains:  "the offer lacked proof of authority from TEC." This is flatly false as the documents reveal.

DSC's June 15 three-page press release went into detail attacking the offer. Find it here . (Me thinks he doth protest too much.) Bishop Lawrence's assistant, the Rev. Jim Lewis, declared: "this was not a legitimate offer of good faith negotiation and was never intended to be." Lewis raised four complaints:

1--No authority from TEC. (Kostel's email refutes this.)

2--Offer was not "properly presented." (In fact, Tisdale's letter went tby email to all DSC attorneys on June 3, and Kostel's email of authorization on June 5. These days, legal matters are routinely routed by electronic means.)

3--Should have been in confidence. Instead it was leaked to the public on June 12. (Public or private is irrelevant to the issue.)

4--Did not give adequate time for consideration. (The letter says it is an offer of negotiation. To my knowledge, DSC never offered to negotiate with the TEC/TECSC lawyers. If they did, I would like to have the documents about it.)

Lewis went on to impugn the motives of the TEC/TECSC side which he saw as only malevolent.

In his recent whirlwind tour of the diocese, Bishop Lawrence brought up the 2015 offer and reportedly repeated the old talking points about its supposed illegitimacy.

The June 15, 2015, offer had taken two years of hard work to construct. It was sincere and legitimate. Certainly, Tisdale and Kostel would not have put these things in writing if they were not absolutely genuine and sincere.

The two documents above prove that the following DSC talking points about the offer are false:

1-There was no legitimate offer.

2. There was nothing in writing.

3. The national church did not support the offer.


It is easy to see why DSC made such a huge issue of attacking and misrepresenting the offer at the time and has continued to do so ever since. This would have given the 36 parishes their independence and sole ownership of their properties. Now, 29 of the parishes are going back to the Episcopal Church control. It is just a matter of time. This cannot endear a lot of the people in the 29 parishes to their trusted leaders.

So, why did not the DSC leaders pursue the offer when they had the chance? Good question on which we can only speculate at this point. Perhaps some day documents will emerge which will explain their actions. I think we have to put it in perspective. Only a few months earlier, on Feb. 3, 2015, DSC had won a spectacular victory in the circuit court as Judge Diane Goodstein handed down their dream decision. She gave them everything they imagined and then some (actually it later turned out to be too much of a good thing). In June, they were eagerly awaiting the hearing in the state supreme court, that had been set for Sept. 23, 2015. No doubt they, and many others (as myself) felt that they had the advantage going into the hearing. Chief Justice Jean Toal had written the famous September 2009 All Saints decision that had rejected the automatic validity of the Dennis Canon in South Carolina. Surely, she would just spread that decision to the whole diocese. So, all in all, the future looked only rosy for DSC in June of 2015. There was every reason to believe the SC supreme court would uphold their cherished circuit court decision; and that would be the effective end of the litigation. The schism would be essentially over, as a smashing success for the secessionists. If sweeping victory appeared within grasp, why give up anything at all? This is my theory of why the DSC leaders summarily rejected the church's offer of compromise settlement. They saw no need for it in June of 2015. There is a word for this---hubris.

The question I hear sometimes is whether TEC's June 2015 offer is still on the table. All this independent layman can say about that is I do not see why it should be on the table. The state supreme court has ruled clearly that 29 parishes remain under TEC/TECSC trust control. If this topic came up in the recent "mediation" sessions, there is no outward evidence of it.

Just speaking for myself and no one else, I think the June 2015 offer is dead.

It is unfortunate that the DSC leaders are still seriously  making representations about the offer that are easily demonstrated to be incorrect. We have the original papers which reveal the factual story of the offer. By insisting claims are true in the face of documents that prove otherwise, the DSC leaders are only diminishing their own credibility. And, this raises a bigger and more serious issue. If they misled their followers about the Church's offer of compromise settlement, on what else did they mislead their people?
Posted by Ronald Caldwell at 8:00 PM