A POINT OF PRIDE

It is with great pride that I share the news with you, dear reader, that Time magazine has named a neighbor of mine as one of the world's 100 most outstanding women of the last century. She lives right here in the little town of Jacksonville, Alabama. On any given day I might chat with her at the Post Office or see her going around town. She is Lilly Ledbetter.

She is a remarkable person with a great story. She was the first woman hired as a manager at the big Goodyear tire manufacturing plant, in Gadsden AL. After nearly two decades, she accidentally discovered that all of the men managers made more than she, some much more, although they had served less time. It was blatant gender-based discrimination. She decided to do something about it and started a long, very long campaign in the courts for pay equality. Her case went all the way to the U.S. Supreme Court, where the 5-4 conservative majority found a loophole to reject her claim. They said she had to file a complaint within 180 days of the start of the discrimination. Ruth Bader Ginsburg wrote a scathing dissent blasting the conservatives and virtually demanding Congress close this loophole. Congress listened, at least the Democratic majority did. The very first law President Obama signed as president was the Lilly Ledbetter Fair Act Act, in 2009. Ledbetter and Ginsburg finally prevailed.

We have not reached pay equality yet, but we are getting closer and closer thanks to Lilly Ledbetter. Incidentally, since she lost her case in court, she never got a penny in payment. This has not stopped her as she still travels the world continuing on her great crusade for fairness for women workers. As for Alabama, no one represents us better than does she. We now have a woman governor and a woman Episcopal bishop-elect. I say thank God for these women, and thank God for Lilly Ledbetter. My daughters and granddaughter are better off because of her as are women and men everywhere.

So, thank you Time magazine for recognizing her contributions. For years, I campaigned here to invite her to be graduation speaker at Jacksonville State University. The authorities finally agreed. She did speak at a graduation but they refused to give her an honorary degree as is the custom with speakers. Oh well, a prophet in her own hometown...

Alabama gets lot of bad press, much of it deserved. So, it is good to see recognition for the great Alabamians who have contributed much to the betterment of humankind. Lilly Ledbetter is Alabama's very own Joan of Arc and I for one am very proud. 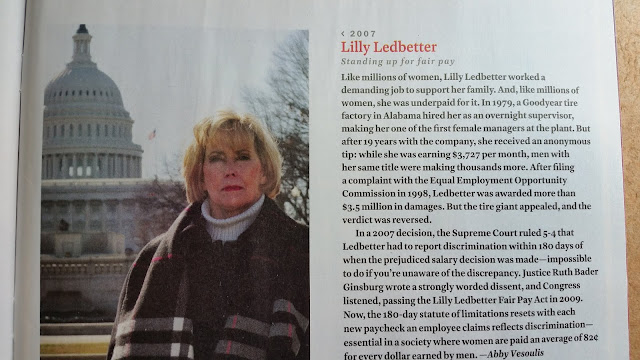 Posted by Ronald Caldwell at 2:10 PM