Bishop Lawrence gave an address, by video, to the annual meeting of the Anglican Diocese of South Carolina, on 3 October. It is available on the diocesan website. Find it here . I have a few comments about his statements.

The tone was somber, melancholic. He spoke a lot about the past, then the need for expansion as well as stewardship (the diocese has not posted the new budget online). To be sure, a great deal has happened in the twelve years since he was installed as the bishop of the Episcopal Diocese of South Carolina. Throughout all of his remarks, he seemed tired and wistful as he announced "no new initiatives" for the remainder of his time, perhaps another year and a half. It was a rather sad talk, quite a contrast to the brash exuberance of the pre-schism addresses.

Apparently, Lawrence is still having trouble coming to terms with the federal court decision on the ownership of the historic diocese. The federal court in Charleston ruled that the Episcopal Church is hierarchical, that the Episcopal Church diocese is the only legal heir of the old diocese, and that the disassociated organization is a new creation as a result of the schism of 2012. This decision is on appeal, but there is little hope of overturn. In fact, both the district judge and the appeals court have denied petitions for a stay pending the appeal. In short, there is little to no chance the appeals court will disagree with the district court order.

Lawrence was bishop of the Diocese of South Carolina from January 26, 2008 until December 5, 2012. In October of 2012, the leadership of the old diocese declared a separation from the Episcopal Church. They created a new entity, which later adopted the name Anglican Diocese of South Carolina. Most of the clergy and laity of the old diocese went along with this new creation which recognized Lawrence as the bishop. He remains the first and only bishop of the new diocese.

Lawrence spent the first few minutes talking about his "predecessors," bishops Temple, Allison, and Salmon. Actually, these were his predecessors as Episcopal bishop. He has no predecessor in his present position. Of the three he mentioned, two would be appalled at what Lawrence has done. Temple worked very hard to bring the diocese into the modern Episcopal Church. He succeeded brilliantly, and against great odds. He railed against any hint of schism against the Episcopal Church. Likewise, Salmon tried his best to keep the diocese together. He put up with a lot of grief from secessionists in Pawleys Island. He fought in court for years to apply the Dennis Canon in the diocese. The last thing Temple and Salmon would have wanted was the schism of 2012. On the other hand, Lawrence is the heir of Bishop Allison, the ardent evangelical whose words and actions embedded in the diocese the idea that ideology (right theology) was more important than adherence to the decisions of the national church.

When the address went off the rails was on social equality and inclusion. He said that the Episcopal diocese of South Carolina was guilty of racism in the past (true). Then, he implied, by contrast, that the new "Anglican" diocese stands for equality and acceptance because it works to incorporate blacks. I do not know what the ADSC has done to champion equal inclusion of African Americans, perhaps a lot. The point is that Lawrence implied that his diocese stood for social justice, an assertion that flies in the face of the well-known facts of history. The direct cause of the schism of 2012 was rejection of equality for and inclusion of homosexual and transgendered persons as made by the national Episcopal Church. The Anglican diocese was founded in 2012 pointedly to exclude certain social elements. When the new diocese joined the Anglican Church in North America, it extended this prejudice and discrimination to women. The ACNA does not allow women to hold offices of authority. Only men can be bishops. So, the Anglican Diocese of South Carolina has incorporated rejection of human rights for homosexuals, transgendered, and women. Any claim that ADSC stands for social justice is ludicrous.

No doubt Mark Lawrence is considering his legacy as he prepares to retire. A hundred years from now, people will remember him as the bishop who presided over the disintegration of one of the founding dioceses of the Episcopal Church. The old diocese now lies broken into three parts 1-All Saints of Pawleys Island and St. Andrew's of Mt. Pleasant and their friends in the "Anglican Diocese of the Carolinas," 2-the Anglican Diocese of South Carolina, and 3-the Episcopal Diocese of South Carolina (the only heir of the historic diocese).

The question of the ownership of the old diocese has probably been settled. It is highly doubtful Judge Gergel's order and injunction will be overturned on appeal. The other question involves the ownership of the 29 parishes. Judge Dickson ordered a nullification of the state supreme court decision recognizing the Episcopal Church ownership of the 29. This is now on appeal at the state supreme court. Since the court has already ruled on this, denied a rehearing, and ordered a Remittitur, it is highly doubtful the SCSC will reverse itself and side with Dickson. This would make no sense in the institutional structure of the state judicial system. Odds are that the loss of the 29 will add to Lawrence's legacy.

So, Lawrence's address was much about the past. It left me thinking what might have been and what a contrast that would be with what we have. With a little more attention to the commandments to love God and our neighbors as ourselves, the grand old, unified, diocese could be exploding with healthy growth. What might have been...

To end on a lighter note, let us visit my garden for a moment. 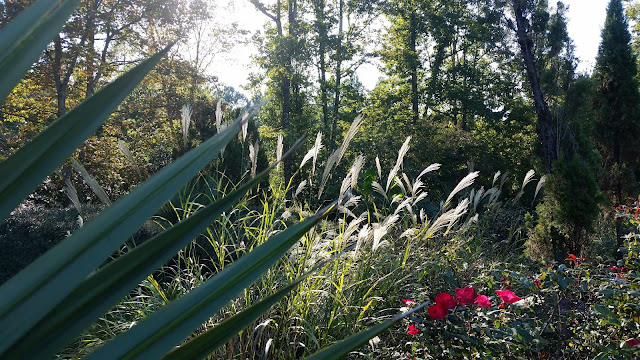 The grass is Zebra Grass (Miscanthus senesis 'Zebrinus'). Ornamental grasses are at their best in early fall. Here the silvery plumes catch the afternoon sun. 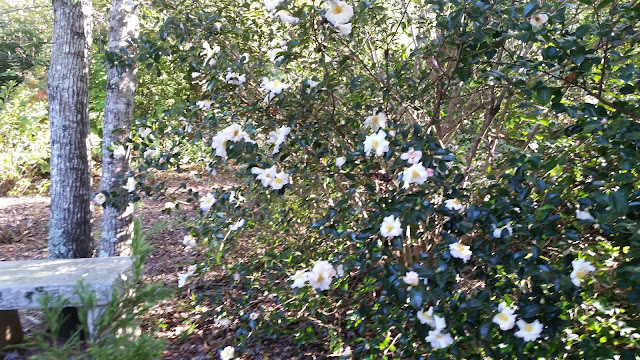 The sasanqua camellias are in full bloom. This is one of the circle of alternating white and pink camellias surrounding a large tree. 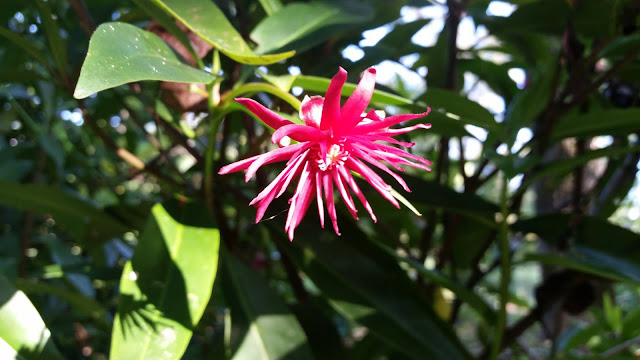 A visit to a garden always helps put things right. Remember, life began in a garden and our Lord retreated to gardens when he needed them. We need them too. Peace.

Posted by Ronald Caldwell at 12:01 PM