Just when we thought this crazy year could not get any crazier....... Now we have the October Surprise, and who in the world could have guessed it? It came in the form of a microbe so small it is barely discernible to scientists. The president of the United States has been invaded by the coronavirus. He has contracted COVID-19, a disease he has tried to pretend did not exist. We all awoke to this news this morning.

So, what does this mean for the presidential campaign? I doubt it will change any votes. People have already made up their minds about voting. It is unbelievable there is a single undecided voter out there. What it does is to guarantee that COVID remains the leading issue in the campaign, and that is bad news for Trump and the Republicans who have tried so hard to minimize this issue.

It is too soon to know what other effects today's news will have on the election. The one huge headline that came from last Tuesday's ugly display of a "debate" was that Trump called on armed gangs of reactionary thugs to "stand by." He implied he is ready to summon these Brown Shirts to take to the streets and use violence to secure his hold on power. To say this is shocking is an understatement. I do not see how Trump's falling under the virus changes this nightmare scenario. It substantiates my theory that we are witnessing an attempted coup d'état of Trump and the Trumpistas to overthrow our traditional democratic republic in favor of a minority right-wing regime.

The best way to guarantee that this civil war does not happen is to have a landslide victory of Biden where there is no question of the winner. There are signs that this might actually happen. New polls in South Carolina show the race even between Trump and Biden and between Graham and Harrison (panicked Republicans are dumping $10m on SC to help Graham). Even in deep red Alabama, Trump's support is just over half, a ten percent decline from four years ago when he carried 62% of the state's vote. Democratic Senator Doug Jones is running well against the Republican contender. All signs indicate that Trump's support among the electorate is much less than it was four years ago. So, it may well be that Trump loses in a landslide. Unfortunately, we will probably not know the results for a long time owing to the mail-in ballots that have to be tabulated.

One thing we have learned is not to underestimate Donald Trump. He is a performer who is ingenious at manipulating public opinion and who has a sizable devoted following, cult some would say. However, he has met his match. He cannot perform his way out of Covid. The virus does not care at all about Trump, or anyone else. It cares only for its own life and procreation and it has now found another host who just happens to be the president of the United States.

I expect by now everyone knows people who have contracted the coronavirus. I have four friends who have fallen victim. Two were hospitalized, briefly. All four at at home now and recuperating without too bad symptoms. One is the rector of my parish who, thank God, apparently has a relatively mild case.

Now, for the October non-surprise.

Life goes uninterrupted as always in my garden which is now in its autumnal phase. Here are some plants of interest on this perfect day of Oct. 2: 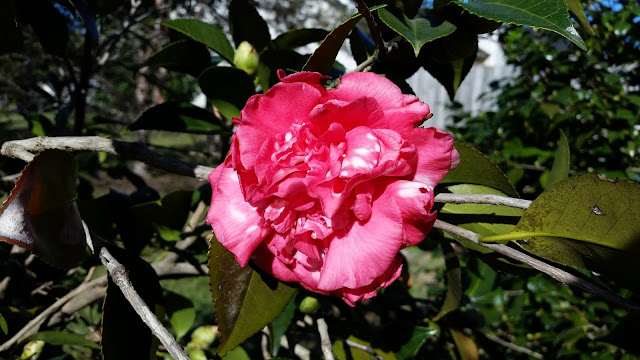 Some camellias started blooming last month. This is Camellia japonica Daikagura variegated. This shrub has lost its protective tree and has "sun burn" but still manages to bloom beautifully. Camellia shrubs prefer mostly shade to survive our hot and humid southern summers. 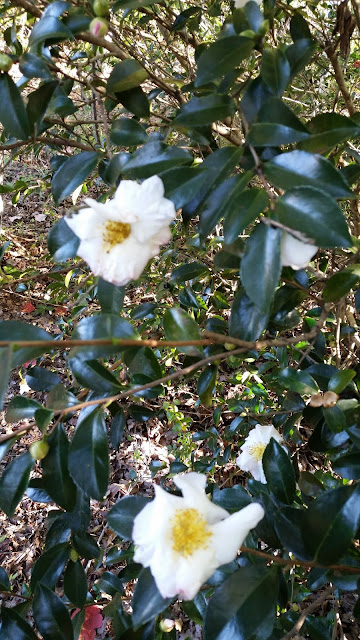 Camellia sasanqua "Setsugekka." I have a circle of camellias alternating white and pink around a large tree. Many gardeners in the colder parts of the south prefer the sasanqua form rather than the standard japonica camellia because it usually blooms before killing frost, which in my area averages Nov. 10. 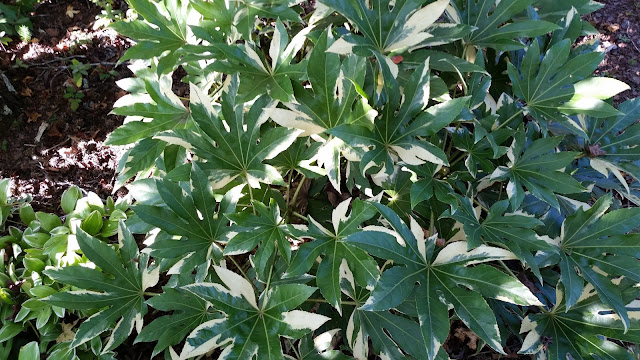 Japanese Fatsia "variegated." This one is full grown at four feet. Fatsia adds a nice tropical touch to a garden. It can be gown outside in the middle and lower south. This one gets some protection, from the heaviest frosts, under a large tree. 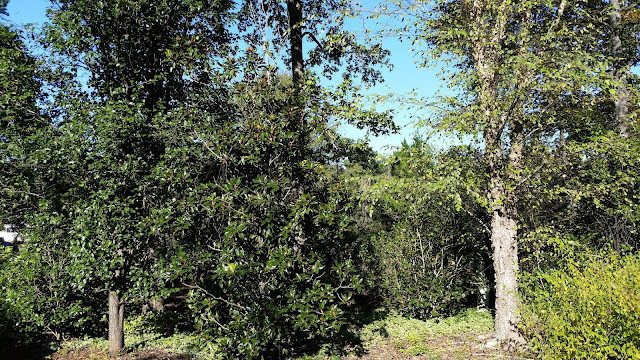 The view from the far corner of my garden, in the afternoon sun. The large tree is River Birch. The small tree in  middle is "Little Gem" magnolia, a smaller version of the standard, huge magnolia tree. Tree on left is Cleveland Pear. The ground cover is Algerian Glacier Ivy. The greenery on right is Japanese Kerria. Numerous camellia bushes happily reside in this part of the garden, protected by the large trees.

Remember, friend, we are here for the living of this hour, surprises or not. Peace.

Posted by Ronald Caldwell at 8:31 AM