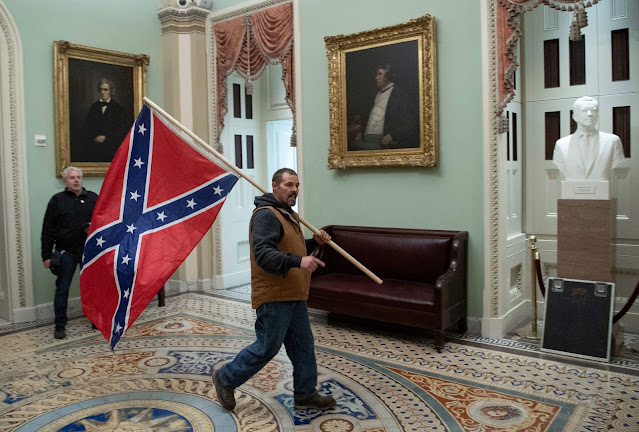 Jan. 6, 2021. The Capitol, Washington D.C. Do you recognize the portrait on the left? It is John C. Calhoun. Plus ça change, plus c'est la même chose. (Click on image for photo enlargement.)

The battle of Washington yesterday was vivid evidence of the state of civil war that now exists in America. Here are my thoughts on the day after the battle.

America is deeply divided. At base, the division rests on race. White people have always seen this country as the white man's own country. Now, the white man is being overtaken by non-white social elements in America. Within a generation, white people will be a minority of the population of the United States. The U.S. will be made up of minorities. Yesterday's mob violence was a vivid expression of white supremacy (look at the Confederate flags paraded in the Capitol).

This racial conflict is forcing America into a crossroads. The country will move in one of two directions. The first is the continued evolution of democracy, that is, equality and inclusion of all people and peaceful majority rule. This is the historic trend of the country for the past seventy years. The Great Democratic Revolution, that started in earnest in the 1950's gave us tremendous strides in equality and empowerment of social elements long ignored and marginalized. Blacks, women, and homosexuals have been the principal recipients of the GDR. However, this democratization has inspired great fear among many whites, particularly white working class men, white evangelical Christians, and white southerners. The fear is that they will be overwhelmed by non-white people and will lose control of "their" country. We have seen a vast upsurge in white supremacist groups in recent decades, especially in the last few years. Racial fear is the driving force among these people.

The other direction is to move to minority rule under a fascist-oriented state. This would keep the whites, soon to be a minority in the U.S., in power. In order for the minority to keep power, it would have to resort to police/military force. It would also have to veer away from the evolving democracy and overthrow, or seriously alter the U.S. Constitution. Sociologists have told us for a long time that a third of the American people favor a fascist state rather than a democracy, as long as the fascist state serves their perceived self-interests. That means an awful lot of Americans do not believe in or support democracy.

Yesterday's battle was an expression of the second trend. The President of the United States is a demagogue, always has been. He understood innately that race was the key to his power and so he stoked white racism to gain the White House. His "base" is about a third of America. They see Trump as a saviour figure who will "save" America for the white people like themselves. They want a white-controlled fascist state. About 50,000 of them descended on Washington and flocked to a rally to hear their saviour figure exhort them to march on the Capitol promising to join them (he did not, instead, having lit the fuse, got into his warm car and raced back to the safety of the White House). Hence, the violent mob invasion and desecration of the Capitol. Blood flowed. Mayhem and vandalism ensued.

There are two elements of the insurrection. One is the ego of Donald Trump. His personality cannot accept his electoral defeat and so he has created a fictitious world in which he was not defeated and he is inciting the violent mob to enforce this delusion. Trump himself is not necessarily driven by white supremacy. His niece, Mary Trump, says he is probably a sociopath because he has spent his life emulating his father whom she declared outright to be a sociopath. A sociopath is one who is entirely self-centered without any ethical or moral principles or concerns for other people. Sounds about right.

The other element of the insurrection is Trump's "base" who are clearly willing to use violence to promote their view of society and government. They are white supremacists. So, there is a symbiotic relation of Trump and the mob. He gets his ego stroked and they get white power. The explosive result of this is the likes of what happened in Washington yesterday.

So, as I see it America is at a crossroads. Either we continue developing democracy or we veer to fascism. My sense as a student of history tells me we will follow the first path. However, even if we keep on this path we have a major problem with the third of the country that is violently resistant to that path. We are deeply and dangerously divided as a civic society. Our challenge now is to keep that society cohesive. How we go about that is the big question of the day.

For starters, it would be wrong for us to ignore the insurrection staring us in the face. This is a domestic war between democracy and fascism. We must view it that way now. The President of the United States tried to subvert the constitutional government of the United States. He should be removed from office as soon as possible. He must be stopped. He must be held accountable. So too must be the political office holders who aided and abetted his anti-democratic and anti-constitutional words and deeds.

My sense tells me democracy will win out because it is the tide of history. However, it will win only if the people who love it are committed to protect and defend it. This is the time to stand and fight the war that has been forced upon us.

ADDENDUM, 1:30 p.m. Nancy Pelosi, Speaker of the House, today called on the Vice President and the Cabinet to invoke the 25th Amendment in order to remove President Trump from office. In the absence of this, she said she would consider moving forward with the impeachment of Trump in the House of Representatives.

Posted by Ronald Caldwell at 8:34 AM