The crisis in our American government is getting more serious by the hour. As a lifelong student of history, I am fascinated, horrified to be sure, but still mesmerized by the recent dramatic and historic events in our country. I am trying to keep up with the news of what is happening and endeavoring to put matters into perspective as we go along. I am trying to understand what is occurring and what it may mean. Writing this blog helps me sort out my thoughts and I hope it helps you sort out yours too even if you may disagree with me. I have several observations to share with you today based on the latest news:

---The assault on the Capitol last Wednesday was much more serious than we first believed. It was an attempted coup d'état, that is, an overthrow of the constitutional government. It was not just a demonstration, march, or appeal to the Congress. It was an outright attempt to overwhelm the constituted authorities in the Capitol and force a reversal of the recent presidential election. The goal was to keep Trump in power even though he had been rejected by the people.

The assault was also more violent than we first thought. We have only to look at the sickening videos commonly available on the Internet to see just how horrifying it was. A police officer was killed and at least 50 others were injured. At last count, 5 people were killed in the attack. 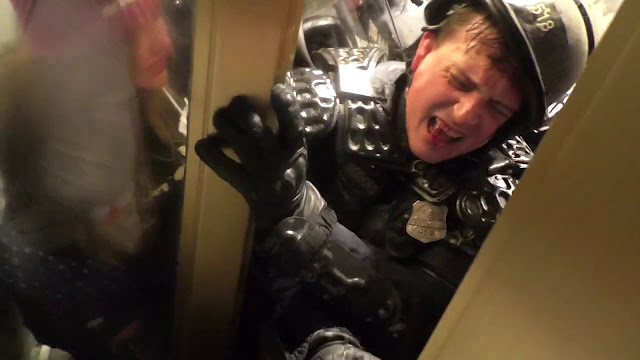 The mob crushes a police officer against a steel door.

The invaders brought in weapons. They intended to do personal violence. Outside, they had erected a hangman's noose. Inside the hysterical mob screamed for Vice President Pence as they searched high and low for him. If they had found him, they may well have killed him before any forces could have rescued him. (In the French Revolution, the mob would have torn him to shreds, cut off his head, stuck it on a pike and propped it up outside for all to see.) They also intended to take hostages as one mobster carried a handful of zip ties to bind hands and feet, obviously of the Congresspeople. If the mob had actually kidnapped Representatives and Senators, the outcome could have been catastrophic.

I am willing to speculate that the invaders had some sort of guidance inside the building. If you have ever visited the Capitol, you know it is a vast and bewildering maze of seemingly endless halls, stairways, and rooms on numerous levels. One needs a map to get around there. Yet, the invaders seemed to have no trouble finding the most important parts of that massive building.

Finally, we know well now that this insurrection was planned. Trump himself kept saying there would be a big march on the Capitol on January 6. It had been advertised openly on the Internet for weeks. A major question now is why the authorities were caught woefully under-prepared for a mob assault that everyone knew was coming.

We know now too that the invaders have declared victory. They have been crowing about their success ever since the assault. They even are reveling in their arrests. There are new credible reports that the far-right gangs are planning violent actions in Washington on Jan. 17, 19, and 20. If the authorities are not prepared next time, shame on them. They will have had plenty of warning.

---The public response to the attempted coup of the 6th reflects the deep division of the country. A recent YouGov poll shows that 63% of Americans opposed the attack on the Capitol. However, the same poll shows that 45% of Republicans supported the attack. Think about that for a moment. Nearly half of Republicans believe it was a good idea for a mob to try to overthrow the government. This is shocking. Moreover, only 27% of Republicans viewed the insurrection as a threat to democracy. Huh? The reality is that it was a attempt to overthrow democracy. If that was not a threat to democracy, what would be? Of course, the majority of Republicans also believe the big lie that that Trump actually won the election and it was stolen from him by the Democrats. There is absolutely no evidence to support this fantasy, yet most members of one of the two major parties in America continue to believe it.

---The Republicans' favorable views of Trump, the lie of the stolen election, and the attempted coup go a long way to explaining the reactions of the Republican Representatives and Senators since the insurrection. Trump has refused to resign. Vice President Pence has refused to call the Cabinet to consider invoking the 25th Amendment that would suspend Trump from office. Mitch McConnell, majority leader of the Senate, has just announced he will not call the Senate to reconvene until January 19, the day before Trump's term ends. This kills any chance that Trump can be removed from office by constitutional means. The House can and will impeach, but only the Senate can remove the President from office (by 2/3 vote). It appears now that the only punishment for President Trump will be a second impeachment by the House of Representatives. This is better than nothing, but still much less that is prudent for the long run.

Only a handful of the 52 Republican senators have spoken out to criticize the president even after everyone has recognized that he incited a violent insurrection against Congress. Some Republican senators and representatives are speaking out against any punishment of Trump. SC's Graham says impeachment would do more harm than good. Actually, the harm would be in doing nothing about people who tried to overthrow our government. It was Edmund Burke who said the only way for evil to succeed is for good men to do nothing.

---Some Republicans, and their media friendly outlets as Fox News, are spreading the falsehood that the attack on the Capitol was the work of Antifa infiltrators and not pro-Trump demonstrators. This is another big lie. Law enforcement officials have flatly refuted this fiction, yet it continues to be promoted. Thanks to cell phones, we know who the guilty parties were.

---Twitter has deleted Trump's account. My guess is the company suddenly realized it could be legally culpable. After four years of letting Trump say whatever he wished, it is a bit late now suddenly to cry foul.

---Trump has announced he will not be attending Biden's inauguration on the 20th. One should bear in mind that a president cannot be indicted while he is in office but can be once he is out of office. At 12:01 p.m. on Jan. 20, Trump will be out of office. Can't you picture a swarm of FBI agents handcuffing the former president, on the podium, on live TV, with the world watching? It makes good sense for Trump to stay away, maybe even in another country.

So, where does this leave us at this point? A monumental political crime has been committed. There must be punishment to fit the crime. The future of the country depends on it. As of now, it appears that the only punishment of Trump as president will be an impeachment but not a removal from office. We do not know yet what charges await him once he is out of office.

Last Wednesday's attempt to overthrow the constitutional government is the most serious political challenge to the nation since the Civil War, 155 years ago. First, we have to recognize the gravity of the situation. Then, we must bring to justice the people who caused and participated in this insurrection. Finally, we must take measures to ensure such an event cannot happen again. All of these measures must be taken to guarantee the strength and stability of our constitutional, democratic republic. The U.S. Constitution, despite its flaws, was a work of genius. It has served us Americans well for more than two centuries. Now it is our turn to serve it well.

I expect to keep a running commentary on the events of the next 11 or 12 days. I invite you to come along. This will be too important for all of us to miss however disturbing it may be. May God help us in this the hour we were given to live. Peace.

Posted by Ronald Caldwell at 1:47 PM