It is Saturday, 15 September 2018. All of South Carolina is keeping a wary eye on the weather as tropical storm Florence slowly churns its way into the state. Early this morning, the center of circulation was near Georgetown and the northeastern area of SC was getting hit with wind and rain. Today we have another moving letter from a person caught in the man-made storm of the schism. In this, Gary Crossley generously and poignantly shares with us his experience. He is a communicant of St. Francis, in West Ashley. St. Francis is one of the ten Episcopalian worshiping communities set up in the wake of the schism. It presently meets in Stuhr's funeral home on Glenn McConnell Pkwy. in the West Ashley area of Charleston.

Thank you for your efforts to keep people like me informed of what has transpired over the past 5-6 years with the Episcopal Church split.

I grew up Presbyterian and I find it to be sadly reminiscent of what I went through in the mid-1970's with the split in the Presbyterian Church when living in Columbia, SC. That split divided family and friends, much like I have seen over the past 6 years.

Fast forward to when after marrying a Catholic faith individual in Washington DC, we merged religions to Episcopal and found a great church on Capitol Hill (Saint Mark's) near the Supreme Court. It was a vibrant church emphasizing laypeople participation in sermons and the church operations.

Which reminds me of why I like the Episcopal Church so much - diversity and various options of participation (Jesus Movement, Stephen ministry, Cursillo, EFM/Education for Ministry, Functional Education, United Thank Offering, Social Justice/Advocacy, Episcopal Volunteers in Mission/EVIM, etc.). Add to that, the number of female clergy and various ethnic/international congregations are a big plus.

After moving from Charleston's Grace Church to Old Saint Andrew's Episcopal in 1999 to be closer to our West Ashley home and where our two young children went to schools. I served on the vestry as the 1706 church went through a renovation and donated to the Century Preservation Fund.

Then, much to my chagrin the split/schism/break occurred - when it came to a vote in early 2013, I decided to abstain in my vote as I told my wife and others (like my college friend who stayed with a Lawrence Myrtle Beach church), but abstained in their church vote as well - he too said there were just winners and losers on this divisive issue.

So we left Old Saint Andrew's and settled in at the St. Francis Episcopal Church meeting in the Stuhr's Funeral Home (Stuhr's has been a blessing to the church and giving us a spiritual home!!!!!).

That leads me to our sermon this past Sunday, September 9, 16th Sunday after Pentecost by The Reverend Doctor Michael Shaffer on "Openness!"

Reverend Dr. Shaffer has been such an Easter gift to St. Francis when he joined us on that special time of the church year. He came to us via Federal Way, Washington and before that from Kansas City, Missouri, becoming a priest after a successful law career.

His sermon was based on scripture, Mark 7: 34-35, discussing "Be Opened," when Jesus helped open the ears, released the tongue, allowing the stranger to speak plainly and hear! Rev. Dr. Shaffer's sermon was right on the mark with praying with the current Old St. Andrews rector Marshall Huey for reconciliation today and tomorrow as both church congregations move forward to do God's work.

As I send this letter to the editor, I find myself opened as to what may happen to the Charleston area as I wait out the "Florence" storm. I also await where my wife and my spiritual journey carries us - a new place after Stuhr's, a return to Old St. Andrew's, or some other adventure? After this past Sunday's sermon, I'm open for the Lord's direction. Only God knows what is in store for all of us in this journey!

I can only say a heartfelt "thank you" to Gary Crossley for sharing this with us. Cannot everyone caught in this schism agree that we all should be open to the movement of the Holy Spirit in this time of trial? If we truly open out hearts, we will find we have far more in agreement than in disagreement.

Crossley mentioned the Rev. Shaffer's sermon of last Sunday. I am including it here. Click on the image for enlargement: 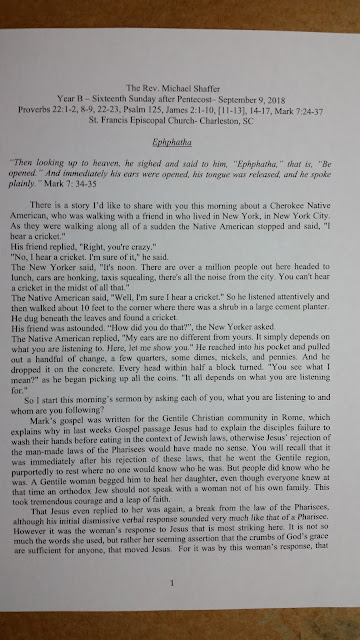 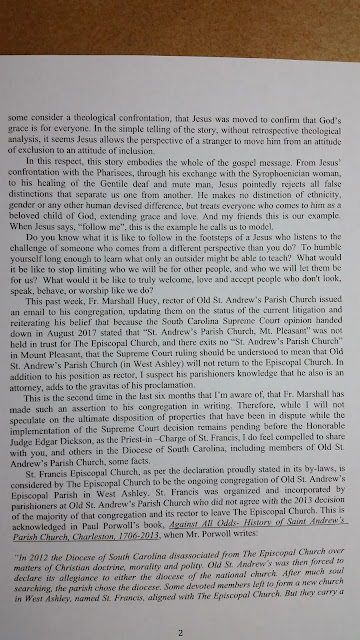 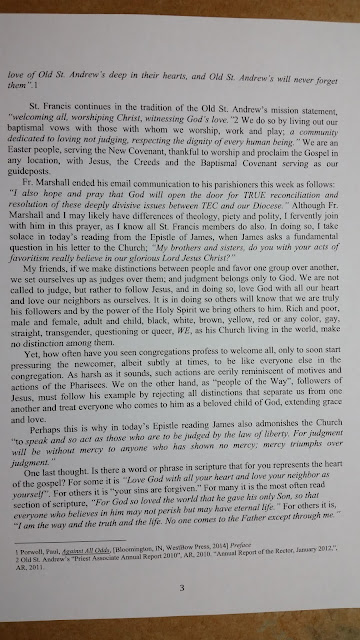 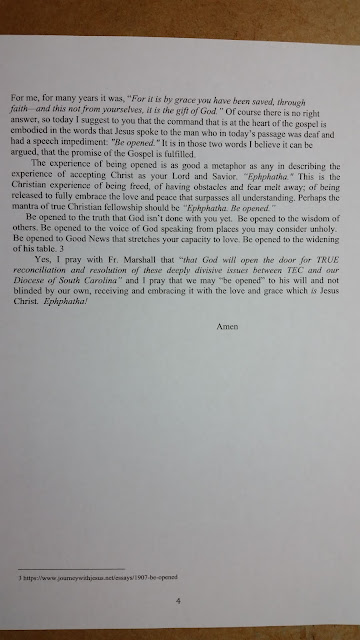 Gary Crossley and the Rev. Shaffer have generously shared their thoughts with us. I am most appreciative.

Every one of the thousands of people caught in this unfortunate division has a story to tell. Whatever side you are on, it will help you, it will help us if you share your experience with us. Email me at the address above.

Posted by Ronald Caldwell at 5:11 AM